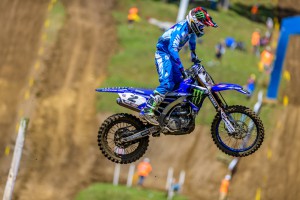 While racing aboard his #2 Yamaha YZ450F during last Saturday's second 450MX Moto at the Spring Creek National in Millville, MN, Monster Energy/Yamalube/Chaparral/Yamaha Financial Services/Yamaha Factory Racing's Cooper Webb injured his left knee and, after a medical evaluation earlier this week, the North Carolina native will not be able to compete in this Saturday's Washougal National. The announcement was made by Keith McCarty, Motorsports Racing Division Manager for Yamaha Motor Corporation, U.S.A.

Cooper commented, "I'm definitely bummed about this knee injury. I was building some solid momentum each moto, and a very small mistake cost me significantly. With that being said, it could be much worse, and I'm fortunate this is a week-to-week deal. I'm forced to miss this weekend at Washougal, but I will be doing everything in my power to get this knee strong again and hopefully be back for Unadilla. Thank you to all my fans and sponsors for sticking behind me. See you guys soon!"

As Cooper mentioned, he and the team are hopeful that he will make a quick recovery and be able to race at Round 10 of the 2017 AMA Pro Motocross Championship, which is the Unadilla National in New Berlin, NY, on Saturday, August 11. An update on Cooper's condition will be provided prior to Unadilla.