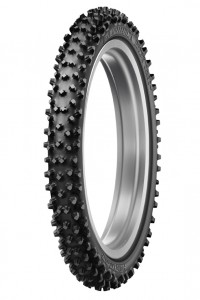 Dunlop's new GeomaxÂ® MX12 saw its debut at the Southwick round of the Lucas Oil Pro Motocross Championship in MA, and was the tire of choice for the sandy track by the majority of top riders.

Designed for soft-terrain applications, the MX12 excels in extreme sand and mud conditions. Dunlop's goal with this tire was to increase overall performance in a broader range of conditions, and it delivers.

The MX12 allows riders to maintain high levels of grip on muddy or sandy tracks even when the terrain hardens or begins to dry out during the course of the race. It also offers increased cornering, acceleration, and braking grip, enhanced handling in rutted terrain, and damps out bumps and impacts to keep the contact patch on the ground and digging in. 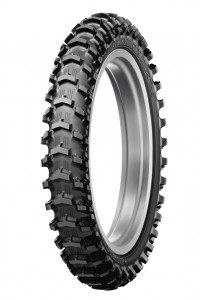 "Southwick is a legendary sand track, and the ideal place for the MX12," said Dunlop's Senior Manager, Off-Road Motorcycle Broc Glover-who won the first three times he raced at Southwick on his way to six national championships. "Riders found they had more overall grip, and that it lasted throughout the race despite significant changes in the race lines throughout the day."

Dunlop's line of GeomaxÂ® tires has dominated racing since its pro-class introduction in 2010. Since then, Geomax motocross-oriented tires have won every Pro Supercross and Motocross championship in the U.S., and racked up hundreds of race wins. Since it's inception, Dunlop engineers have continued to evolve the Geomax series with testing input from professional racers, and development of new-generation tires at Dunlop's Proving Grounds (DPG) in Huntsville, Alabama.

For the MX12, Dunlop's U.S. race team joined forces with DPG and Dunlop's European MXGP World Championship racing team to develop the tire on tracks here and in Europe, including testing on some of Europe's "bottomless sand" tracks on the world MX championship schedule.

Designed for soft-terrain applications, the MX12 excels in extreme sand and mud conditions. Dunlop's goal with this tire was to increase overall performance in a broader range of conditions-for example maintaining the tire's high level of grip on muddy tracks even when the mud begins to dry out.

Compared to the MX11, the MX12 offers increased cornering traction, acceleration traction, braking grip, enhanced handling in rutted terrain, and does a better job of damping out bumps and impacts to keep the contact patch-both front and rear-on the ground and digging in. 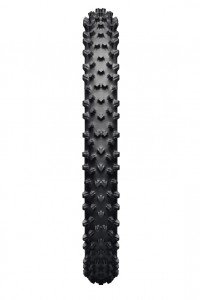 Tread Pattern
For enhanced acceleration and braking grip, Dunlop developed new V-Block technology, which puts a V-shaped row of blocks down the center of the rear tire. By optimizing block angle, stagger and structure of this center area, V-Block technology offers more traction on straights and when accelerating out of corners, increases braking grip, and does a better job clearing the tire in muddy conditions to maintain maximum performance. This tread pattern also contributes to better bump-control for less deflection on rough tracks, as does the new construction. 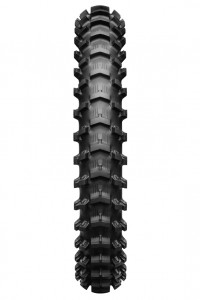 rear tire, better known as "Block-in-a-Block" technology. This configuration on the shoulder knobs of the tire delivers more progressive cornering action and aids in slide control. The key to this knob design focuses on adding overall height to each knob at the center of this new multi-block configuration- specifically, with a taller, smaller, inner knob. The additional biting edges and the increased surface area they provide effectively increase the tire's footprint and side grip for additional cornering traction.

Tire Profile
Engineers reshaped the front and rear tires to increase height in the profile. This has two benefits: First, it effectively increases the diameter of the tires and increases the length of the contact patch. This increases the tire's ability to absorb bumps, enhancing traction in rough conditions. Second, the tread area is slightly narrower in the front and back, reducing rolling resistance and improving steering in rutted sand and mud conditions. 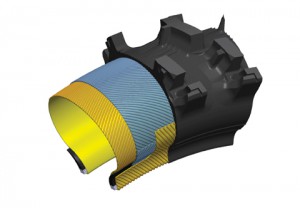 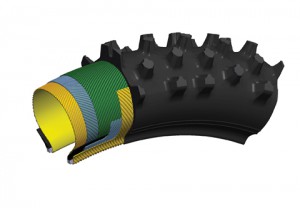 The new Dunlop MX12 tires are expected to arrive at US dealers in September.