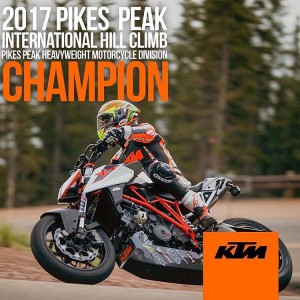 Accustomed to hitting triple digit speeds on the race track competing in the AMA Pro Supermoto and Pro Road Racing Circuits, American racer Chris Fillmore took on a new course, the Pike's Peak International Hill Climb, with stunning results. In his rookie attempt in the historic competition, Fillmore piloted a KTM 1290 Super Duke R up to the peak, beating the other contenders in the heavyweight class to not only take first overall but also set a new course record outright lap of 9.49.265.

World renowned for its treacherous ascent and dangerous course, the Pikes Peak Hill Climb aka the Race to the Clouds, near Colorado Springs, Colorado, was founded in 1916 by Spencer Penrose and this year marked the 95th running of the event. At just over 12 miles long, the course starts at mile marker 7 at 9,390 feet and ascends to the 14,115 foot peak as racers navigate through 156 turns. Climbing to that elevation not only affects the competitors physically and mentally, but the thin air also diminishes the performance of the internal combustion engines of the motorcycles and vehicles that run the course.

Fillmore's exceptional debut at the mountain resulted in him beating out the previous record of 9:52.819, which had been in place since 2012 when it was set by Carlin Dunne on a Ducati Multistrada 1200. Fillmore's impressive record breaking run aboard his 1290 Super Duke R was accomplished with an average speed of 73.267 mph. It was a successful event for the Orange Brigade as his KTM teammate Rennie Scaysbrook (also aboard a Super Duke) finished second overall in the Heavyweight Motorcycle Class with a time of 9:57.712.