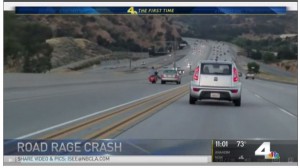 This article has been updated with a title change and to include a full recap of what the videographer witnessed.

Yesterday a road rage incident between a motorcyclist and a guy in a car set off a chain of events that looked like it could have been a scene straight out of CHiPS.

The video of the altercation was recorded by a motorist who was following behind the motorcycle rider and car driver on the 14 Freeway in Santa Clarita. According to an NBC Los Angeles interview with the videographer, the driver was in the carpool lane and the motorcycle rider was passing the car on the right side between the carpool and fast lane when the car tried to move out of the carpool lane and nearly hit the rider. Words were exchanged and the rider tried to kick the passenger door and then moved into the carpool lane, exchanged more words, and then kicked the driver side door.

The driver reacts immediately by swerving left into the Harley-Davidson rider and nearly slams the rider into the center divider. As the driver swerves right he begins to lose control of the car and overcorrects to the left sending his vehicle into the center divider and then the vehicle bounces back to the right crossing three lanes and T-bones a Cadillac Escalade EXT. The collision with the Cadillac was so hard it flips the EXT over onto its hood.


According to NBC Los Angeles, the driver of the Cadillac was taken to the hospital with non-life threatening injuries. The driver of the sedan remained at the scene while the Harley rider continued on and is now being sought by the California Highway Patrol. The CHP says they are investing this as a road rage incident and possible hit and run.