Unlucky Rider Gets His Helmet Confiscated By Bees 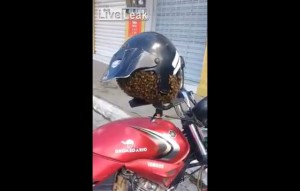 You might have heard of the beehive hairdo, but what about the beehive helmet? I don't know any females (or males for that matter) that would be bold enough to try and shove their head into this motorcycle helmet filled with thousands of bees, let alone get anywhere near this horror film come to life.

This took place in Brazil and the poor dude that owns the motorcycle hung his open face helmet from the handlebars-like most people do-and when he returned to the bike the lid had become an impromptu beehive. Science tells us that either a queen bee found the helmet to be the perfect new abode and all her workers followed suit or the Wu-Tang Clan were holding a concert in the helmet.


I guess the other possibility could be that the bees were just attracted to the owner's really sweet Yamaha YBR125. Y-BEE-R, get it?