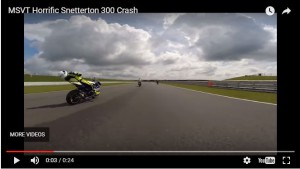 Track days are a great opportunity to hone your riding skills in a closed course environment, but there are also many things that can go wrong and this may be one of the wildest scenes we've come across. Josh Boyd has to be one of the luckiest guys as he was unfortunately knocked unconscious by a flying piece of motorcycle debris while riding his sport bike at 140mph. Fortunately, Josh fell off the side of the bike before it crashed into the sidewall and shattered into hundreds of pieces.

The wild scene was caught on video over the weekend at track day at Snetterton, when Boyd was traveling at about 140mph and then suddenly the belly pan from Kawasaki ZX10R ahead of him flies off the bike. Off screen the belly pan apparently stuck Boyd in his motorcycle helmet and knocked him out. Then we can see as he comes into frame that Boyd is totally unconscious as his body is preciously slung back and slightly off to the side of his motorcycle. Just before the bike runs off the track, Boyd falls off and slides across the grass and along the metal guard rail.

Amazingly after being taken to the hospital Boyd came to and it was deemed he wasn't seriously injured other than incurring a concussion and having some minor vision problems. His bike on the other is totaled.

It's hard to say why the belly pan flew off the bike. We don't know if there was something that caused the piece to fly off? But if anything, this video serves as an intense reminder as to why it's so important to double, triple, and quadruple check that your motorcycle is in proper working order and everything is secured or [mageProductLink sku="315-1566" title=""]safety wired[/mageProductLink] before taking it to a track day or race. A few minutes of motorcycle inspection could mean a world of difference for all those on the track.