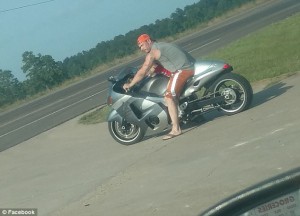 A parent or loved one passing their love of motorcycles to a child can be a beautiful thing, that is until you come across some jackhole who thinks it's a good idea to take a Sunday motorcycle ride with an infant draped across the top of a sport bike tank. Unfortunately that's exactly what the great state of Texas and eventually social media were treated to this past holiday weekend when a guy was spotted at a Tarkington, Texas, gas station, with a baby that's probably a little more than six months old, lying on top of his Hayabusa gas tank. There are many thing wrong with this whole scenario, but the motorcycle rider's total disregard for the child's safety is absolutely astonishing.


As crazy as the scene may have been, what's even wilder about this story is that the person (according to WKRG, they chose to remain anonymous) who first spotted and took a photo of this atrocity, didn't react like one would expect-by immediately calling the police. Instead, they posted the pic to Facebook, in an effort to try and identify the rider, where it immediately spread. Actually, as stated in a press release from the Liberty County Sheriff's Office, no one called in to 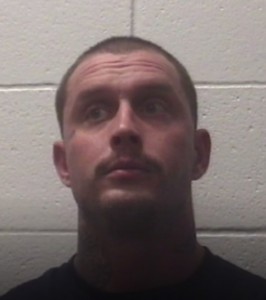 report the baby on the bike. It wasn't until after there was enough information gathered about the incident that the authorities were finally able to track down the rider, Anthony Welsh. Evidently this was Welsh's first time making poor decisions with a motor vehicle, as he was arrested for open traffic warrants.

Each state has their own laws and restrictions when it comes to riding a passenger on a motorcycle, in Texas you cannot ride with a passenger under the age of five unless the child is seated in a sidecar attached to the motorcycle. You also have to have passenger foot rest (that the passenger can reach) and a rear passenger seat (the passenger cannot be in front of the rider). Welsh is now in the custody of the Deer Park Police Department and the incident is still under investigation. So on the bright side, Welsh could possibly be facing a litany of other charges including child endangerment-we can only hope.