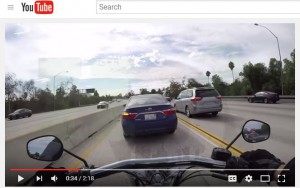 The rider in the video below was cruising along in the carpool lane on an L.A. freeway on his Harley with light traffic across all the lanes. The rider had a really clear path ahead of him and had no expectation that someone would cross over the double yellow right in front of him. Unfortunately things happened so quickly that the even though you can see the V-Twin rider hit his brakes there was too much speed and too little space to avoid crashing into the back of the car.

The wildest part of the video is the fact that upon impact the rider flipped over the front of the bike and landed on on the trunk of the car, WHICH KEPT GOING until the rider began hammering on the rear window with his fist. Thankfully the rider was in full motorcycle gear with a full face helmet to help save him from major injury. Things get even weirder in the video when rider confronts the driver who has a very strange and unfazed reaction.