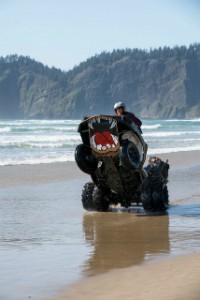 A worthy offroad four wheeler, the radically transformed Sportsman Touring 570 EPS that the RSD team built for Toyota's Hotel Tacoma event is hardly a shadow of its former self. Inspired by an ATV that someone had strapped a couch to, Roland wanted to do the same and he and his team created a totally unique machine that evolved into what they dubbed, The Sasquatch. The Sasquatch features a narrowed and custom Tacoma frontend that's been done up pre-runner style with a love seat mounted on the back. The most intriguing part of the build however, is the fact that the once stock four-wheeled machine was adapted into a six wheeler with two extra rear wheels. The added width at the rear helps give the vehicle a bit more stability, especially when wheely-ing at 40mph down the beach with two rear passengers.