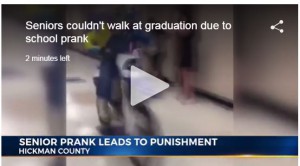 It's a right of passage that's been going on since the first graduating class of cavemen and women decided to let a baby Velociraptor loose in their high school cave on the last day of school. Since that time high school seniors have been elevating the level of pranks in an effort to leave their legacy in the halls of their schools. Some pranks are harmless, like filling the front office with hundreds of helium balloons while others are a little more nefarious and destructive, like squeezing toothpicks and Superglue into all the exterior door locks on campus.

Last week WKRN in Tennessee reported on two seniors, Lenny Watts, and Daniel Myers, from East Hickman High School in Tennessee wanted to go out in style and thought it would be a good idea to ride their dirt bikes through the halls. The stunt went off without a hitch and as you would expect there were plenty of kids lined in the hallway with their phones out to record the antics.

It was a harmless, albeit loud prank; can you image shock of the teachers and unsuspecting students when they heard the echoes of the exhaust resonating off the floor and through the narrow hallway from the Honda and Yamaha? Even though no one got hurt, the boys were suspended from school for two days (the event took place on Wednesday). All seemed well and good, the boys pulled of the prank, they were caught and punished, end of story. However, it wasn't the end of the story, because on Friday there were informed that besides serving the two-day suspension they would also not be allowed to take part in the graduation ceremony the next day. They weren't even allowed to sit in the stands with their families and the families and friends of the other graduating students, and when they tried to sit in the crowd they were escorted off campus.

These two guys weren't the first ones to pull off a stunt like this, there are several videos on You Tube from other people who have done the exact same thing. One of the most popular videos was posted by Austin Campbell who rode a YZ 450F through his school, that video has more than 11 millions views.

Obviously Lenny and Daniel and their families weren't too happy about not being able to attend graduation. However, had they watched Austins video they might have had a good idea as to what might have been in store for them, as Austin received the exact same punishment. Maybe these boys missed that day in history class when the quote from George Santayana, "Those who cannot remember the past are condemned to repeat it," and Winston Churchill "Those who fail to learn from history are doomed to repeat it," was taught? Whatever the case may be, we are left us with the debate of how far is too far? Did the punishment fit the offence?