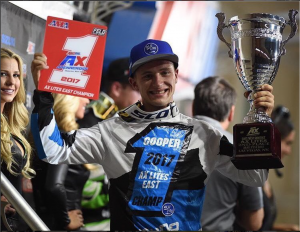 - Yamaha Motor Corporation, U.S.A., is proud to announce that Justin Cooper, who races the #191 YZ250F for Yamaha/Rock River/bLU cRU, clinched the 2017 Arenacross Lites East Championship this past Friday night at the Orleans Center in Las Vegas, NV.

Justin won the title with a 14-point lead over the second-place finisher. He won three Arenacross main events this season, including a double win in Baltimore and another win in Louisville. Over the course of the nine-event season, Justin notched seven podiums (including the three wins), along with a 4th, and a 5th. Consistency wins Championships, and that's exactly how Justin captured the AX Lites East title. 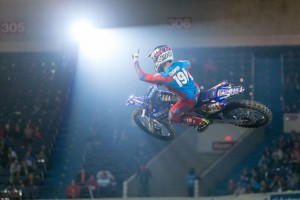 "Congratulations to Justin on this big accomplishment in his still-blossoming racing career," commented Keith McCarty, Motorsports Racing Division Manager for Yamaha Motor Corporation, U.S.A. "Justin is one of our young and very talented Yamaha bLU cRU riders, and all of us at Yamaha are proud of what he has achieved in Arenacross Lites this season."

"It feels awesome to get the AX Lites East Championship! It was a long and tough nine rounds, but I was able to stay consistent all the way through and come out on top! It was a great experience, and I can't wait to use everything I learned to keep improving and striving to reach my future goals!"