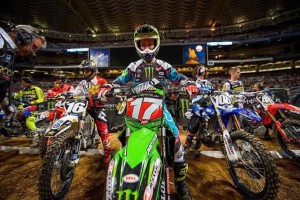 It was tough night this past Saturday at MetLife Stadium in East Rutherford New Jersey, as it was just announced that Kawasaki's 250 rider, Joey Savatgy, has been docked 5 points for his race incident. Savatgy entered the night with the East Coast 250 points lead and had led the main event for the first half of the race before getting passed by Zach Osborne. Then with just under three minutes left, Savatgy crashed just ahead of a turn. The crash put Savatgy and his KX 250F across the track (coming out of the turn) and instead of jumping back in where he went out, Savatgy just rode straight ahead (1:40 mark in the video below). A grievance was filed and after review the AMA felt he broke the rules and thus docked him the 5 points, putting him back to an eight place finish for the night and now sitting one point behind the new race series leader Jordon Smith (160 points). Savatgy is now tied for second overall with Zach Osborne, both of which have 159 points. Vegas is going to be exciting!!!

The announcement from the AMA is below:

Decision of the Race Director,

On April 29, 2017, after the 250SX main event, a protest was filed with regards to an on track incident involving rider #17 Joey Savatgy. After a complete review of the incident, including video and eyewitness accounts, it was determined by the Race Director that rider #17 did exit the track and re-enter in a different location. In doing so, rider #17 did gain positions and an advantage while cutting a section of the race track. This is in violation of rule 4.16.i.

It was determined that by not re-entering the track in the lane where the rider left the track, he gained 4 positions and an advantage. As per the 2017 Monster Energy AMA Supercross an FIM World Championship rulebook, the penalty for this infraction is a loss of 5 positions in the final results.

An appeal was presented by the rider and an appeals hearing was convened. After reviewing all evidence presented by both parties it was determined by the appeals panel that the infraction did occur and the penalty was justified. The decision of the Race Director was confirmed. The decision of the appeals panel is final; no further appeal is possible.