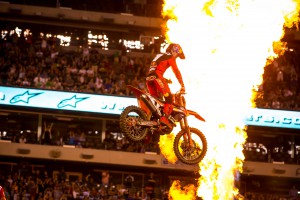 Dungey came into Round 16 with a three-point deficit in the championship standings but the three-time AMA 450SX Champion knew what he had to do to turn it around. Dungey kicked off the day in a big way, claiming the top spot in the overall qualifying sessions before going on to win the 450SX Heat 2. Musquin, too, got off to a great start with 2nd place in qualifying and 2nd place in 450SX Heat 1. Both riders carried their momentum into the evening's Main Event.

Dungey and Musquin powered their KTM 450 SX-F FACTORY EDITION machines into favorable positions off the start as they rounded the opening lap inside the top five. The Red Bull KTM Factory Racing duo climbed their way toward the front where they eventually found themselves 1-2 by the fourth lap. From there, the teammates battled it out for the top position and Musquin took over the lead just before the halfway point.

Musquin led for 13 laps before a mistake on the final lap allowed Dungey to pass by once again for the lead. From there, Dungey held strong to ultimately claim his 3rd victory of the season in New Jersey, thus reclaiming the points lead with one round remaining in the series. His biggest competitor in the championship, Tomac, crashed early on and finished 8th for the day, giving Dungey a nine-point advantage heading into the final round in Las Vegas.

Dungey: "I just really tried to apply it all [today]. Obviously we had two races to go coming into this round and I knew we needed to be there from the beginning. Practice is a good way to set the tone and I felt comfortable, I was able to hit my marks and it felt effortless in a way. The Main Event wasn't a great start but I snuck in there and was able to come out 3rd. I saw Jason and Eli make mistakes and I thought to myself 'no mistakes', it was kind of a patience track. Marvin's lines were better so I was thinking maybe it's not a bad thing to let him by, I know I'm going to pick up on a few lines and I did. I had my head down and came around the corner to see Marvin on the left and I was able to sweep by and it was good to get a win - it's nice to see all three of us up here on the podium."

Musquin led the most laps of anyone with 13, where he finished in a close 2nd place after 24 laps of racing.

Musquin: "It took me a while to get going, I was a little bit slow at the beginning and was searching for good lines. I finally got a good rhythm - Eli and Jason went down so you could tell the track was really difficult to not make mistakes. Ryan and I were 1st and 2nd so that was really cool and then I was able to get around him, I think I had one or two better lines but I feel like he saw some of the lines and he picked it up - I felt like I was getting away a little bit and then he was coming back on my rear wheel. I tightened up a little bit on the last lap and I got a good run through the whoops but maybe too fast - that sweeper and that rut were really difficult to feel the front end and I made a mistake. In the end, it's a KTM that wins so it's good for us but it's hard, I feel like it was going to be a good race but it's still 2nd place so it's good."