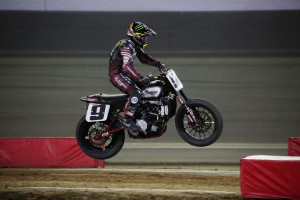 History was made under the lights at Daytona International Speedway as the American Flat Track series entered its new era at the Harley-Davidson DAYTONA TT presented by Politis & Matovina. Jared Mees took home a dominant AFT Twins presented by Vance & Hines win in to become the first rider to win an American Flat Track race on the Indian Motorcycle Scout FTR750.

The No. 9 Indian Motorcycle Rogers Racing FTR750 rider's big win at the 2017 season opener also marked the first time that a rider won a TT on twin in nearly 34 years, when fellow National No. 9 rider Jay Springsteen won at the Peoria TT in 1983.

"You don't know how special it is to win the first Daytona TT on the Indian," Mees said. "I'm going to go down in the record books as the first to win on the Indian. I'm so excited just for my entire team and the hard work that everybody put in. It's unbelievable what we all went through. Indian Motorcycle did an outstanding job."

The win also marked a personal record as Mees' first TT win. It also served as personal redemption as Mees gets his run at recapturing the No. 1 plate off to a good start.

Although it's a new era for flat track, it was the usual suspects. Mees' rival and fellow Indian Wrecking Crew rider Bryan Smith finished second on the No. 1 Indian Motorcycle Racing backed by Allstate FTR750. Although it was not a win, the reigning Champ was happy to leave Daytona right on Mees' heels.

"There was a lot of pressure after this race," Smith said. "Like Jared said, it's like, 'oh yeah, we gotta race next weekend too.' There was so much focus on this weekend and especially us having a new bike and a new team. So second place at a TT in Daytona. I'm happy."

Joining the Indian Motorcycle duo on the podium was TT specialist Henry Wiles on the No. 17 DPW Racing Kawasaki Ninja 650.

"I actually had a pretty good run, considering we came from the second row," Wiles said. "We built a pretty different bike for this race and I thought it would work good in the corners, kind of like it did. But like these guys said, there wasn't much of a track so it was really hard to make up time on guys. Once everybody kind of got settled in, it was kind of tough to make up time anywhere. One place that I could make up time, because my bike was a little bit different, was kind of through the tight stuff here and going off into the first corner. I think once we got them stood up and down, I was lacking a little bit of traction but also a little bit of motor, so it was just hard to make up the straightaway advantage I'd give up to these guys, but it was a fun race for me."

Jake Johnson had a bit of redemption himself, as the No. 5 Harley-Davidson Factory Flat Track Team XG750R rider was plagued with poor luck all day until when it counted, taking a fourth-place finish in the Main. Completing the top-five was Bronson Bauman on the No. 37 Rod Lake Kawasaki Ninja 650.

Dalton Gauthier fired the first shot in the AFT Singles class with a hard fought win on the No. 22 Estenson Racing Yamaha YZ450F over Wyatt Anderson on the No. 120 Waters Autobody Racing KTM 450 SX-F. Like Johnson, the day started rough for the young Gauthier, but it ended well when it counted most.

"It feels awesome considering I was 45th in qualifying today with bike problems, but the team worked through it. I'm so pumped right now. I charged the whole race and it means the off-season training worked this year. This winter, actually. I can't thank Estenson Racing enough for all of the work that he's done for me and he's put me on some badass bikes. I'm so pumped right now. I can't believe I just won that."

Completing the podium was one of the other rising stars in the sport, Kolby Carlile on the No. 36 K.C. Cycle Honda CRF450R.

The American Flat Track series heads north for the Atlanta Short Track at Dixie Speedway on Saturday, March 25. Atlanta fans will hear the roar of the AFT Twins class as they race on the red Georgia clay for the first time and will see if Jared Mees will secure his second win of the season. Also, spectators can witness the up-and-coming talent in the AFT Singles class, as they compete on the 3/8-mile track where Dalton Gauthier will contend to hold the lead in the point standings. Tickets for the Atlanta Short Track can be purchased at https://www.showclix.com/event/georgia-short-track.