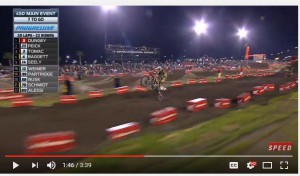 As the Supercross series heads into the hollowed grounds of Daytona International Speedway this Saturday we thought we'd take a quick look back one of our favorite highlights (there has been many over the decades) from one of the past races.

In 2015 after Andrew Short led the first half a dozen laps with Ryan Dungey trailing in third, towards the end of lap six Dungey and Cole Seely mixed it up in the last corner with Seely laying it down. That left Short directly in the Diesel's sights and at the start of the eighth lap Dungey opened it up on his Factory KTM 450 SX-F and ripped into Short to take the lead (1:08 mark). But that's not the highlight we are here to see.

With an 8th place start, Kawasaki Factory rider, Eli Tomac, was hanging back in 6th place on lap nine with a 6.9 second gap behind Dungey, but that didn't last long. With seven laps left Tomac made a hard charge on his KX 450F towards the front and was sitting in 3rd and then like a scene out of Excite Bike, Tomac hit the first whoops segment after the start on his back wheel and toe tapped the section with the speed and grace of a Gazelle(1:43). The highlight video at the end doesn't show it but Tomac took that section on his rear wheel a couple times. Sure we've seen this before in practice sessions and what not, but it's not a move you see too often in a race scenario. And although he dint't catch Dungey, on lap 13 Tomac passed Weston Peick to take the 2nd position and ended up finishing the race 4 seconds behind Dungey.

If Tomac can keep up the performance he's been putting down these past few races we just might see him relive this awesome highlight again tomorrow night.

Catch all of the 2015 Daytona 45o SX race highlights below.