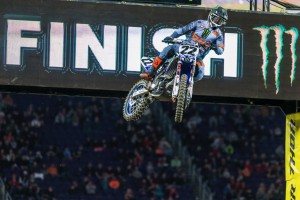 Following an eventful weekend up in Minnesota, the Monster Energy/Yamalube/Chaparral/Yamaha Financial Services/Yamaha Factory Racing Team heads into Atlanta for this weekend's MotoFest, with two-time Supercross Champion Chad Reed carrying the flag as the lone rider for the squad.

"This year has easily been one of the most challenging seasons of my career and, honestly, for no clear reason" Chad said. "But, that's racing sometimes. Atlanta was where I got my last 450SX main event win in 2015, so I'm very much looking forward to Saturday night. I've got a positive attitude, and I'm going into the weekend with a clear plan and a good vibe."

After going down hard in his heat race last Saturday night at the Minneapolis Supercross and suffering a bruised shoulder, Chad's teammate Cooper Webb has been ruled out of this Saturday's Atlanta Supercross. Cooper is currently rehabbing from the injury, and he hopes to get back to racing his #2 Factory Yamaha YZ450F as soon as possible. An update on Cooper's condition will be provided next week.

Tomorrow night, during the AMA Arenacross event inside the Georgia Dome, Chad Reed and the Monster Energy Girls will be on hand to meet fans, sign autographs, give away posters, and pose for photos during a special MotoFest riders apperance.

Other Yamaha bLU cRU riders who will be on hand at the Georgia Dome include:

During tomorrow night's riders' appearance inside the Georgia Dome, look for "The Yamaha Card" tickets being handed out. Grab a ticket, fill it out, and give it to a Yamaha Financial Services representative in attendence at the riders appearance. A random drawing will be conducted later tomorrow night from all entries received, and two lucky winners will be chosen to receive either a Chad Reed or Cooper Webb jersey. No purchase or application for credit is necessary to enter or win. The Yamaha Card (Yamaha Financial Services Credit Card) is issued by WebBank, member FDIC.

Be sure to visit the Yamalube/Star Racing/Yamaha Team transporter, and enter the Yamalube 50th Anniversary Sweepstakes.


Look for the Yamalube Umbrella Girls at the Yamalube/Star Racing/Yamaha Team transporter, and ask them to enter your name in the Yamalube 50th Anniversary Sweepstakes. On Monday following the race weekend, one lucky winner's name will be drawn for the Free Case of Yamalube, and all names collected on the race weekends will be automatically entered in the drawing for the 2017 Yamalube 50th Anniversary YZ250F or YZF-R3. A First Prize Winner and Second Prize Winner will be selected in a random drawing on October 2, 2017 from among all eligible and qualified entries.