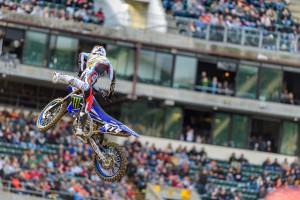 This Saturday, the Monster Energy Supercross series goes deep in the heart of Texas for Round Six, and Monster Energy/Yamalube/Chaparral/Yamaha Financial Services/Yamaha Factory Racing Team riders Chad Reed (#22) and Cooper Webb (#2) will be ready to dial up the action at AT&T Stadium in Arlington.

The Arlington Supercross will take place on Saturday during the afternoon and early evening, with opening ceremonies beginning at 3:30 PM. The event will be broadcast on FS1 beginning at 10:00 PM Eastern Time.

Chad and Cooper have both reached the podium in the two most-recent rounds of the series, with Chad finishing second in Phoenix two weeks ago, and Cooper notching a third-place finish this past weekend in Oakland. Both riders will be gunning hard to hit paydirt on Texas soil aboard their Yamaha YZ450F machines.

"Shorter plane flights and closed stadiums...I'm excited to be heading east," Florida resident Chad said. "My starts are my highest priority right now. With a solid start, I believe I'm a podium guy with a shot at winning. Arlington has been good to me, and I have yet to win at AT&T Stadium. I'm looking forward to changing that this weekend." 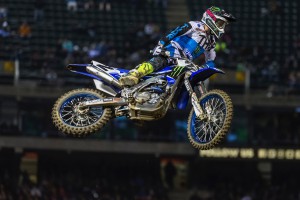 Cooper commented, "I'm from North Carolina, and we're now at the point in the season where we'll be racing closer to where I grew up, which is great. Arlington is a great event, and Texas fans love Supercross. I'm ready to put on a show for them and keep this momentum going."

While visiting the Monster Energy/Yamalube/Chaparral/Yamaha Financial Services/Yamaha Factory Racing Team transporter, be sure to enter our Yamalube 50th Anniversary Sweepstakes.

Look for the Yamalube Umbrella Girls at the Yamaha Factory Racing Team transporter, and ask them to enter your name in the Yamalube 50th Anniversary Sweepstakes. On Monday following the race weekend, one lucky winner's name will be drawn for the Free Case of Yamalube, and all names collected on the race weekends will be automatically entered in the drawing for the 2017 Yamalube 50th Anniversary YZ250F or YZF-R3. A First Prize Winner and Second Prize Winner will be selected in a random drawing on October 2, 2017 from among all eligible and qualified entries.