Yamaha Factory Supercross Team Is 'Zona-Bound For Round Four, In Phoenix 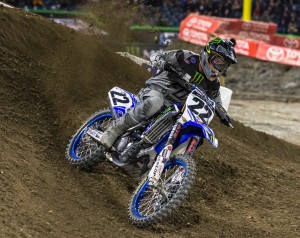 After three straight weeks of action-packed racing in Southern California, the Monster Energy Supercross series leaves the Golden State and will be under the lights at University of Phoenix Stadium in Arizona this Saturday night.

The Monster Energy/Yamalube/Chaparral/Yamaha Financial Services/Yamaha Factory Racing Team and its riders--two-time Supercross Champion Chad Reed (#22) and two-time 250 West Supercross Champion Cooper Webb (#2)--will be hoping that this visit to the Copper State yields gold, in the form of podium results and a race win for the YZ450F-mounted tandem.

Last year at Phoenix, Cooper finished second in the 250SX main event, and in the 450SX main, Chad crossed the finish line just outside the top five with a sixth-place result.

"The start of this Supercross season has been very frustrating for me," Chad commented. "And now, we're heading to one of only a few stadiums where I've never won. But, I'm as excited as ever to change all that. Getting my season back on track is my highest priority and, even though I haven't won in Phoenix, it has always been a solid race weekend for me, and I'm definitely hungry for a win!" 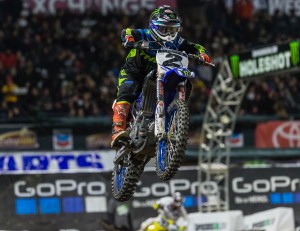 Reflecting on his breakthrough weekend at Anaheim 2, Cooper said, "Last weekend went really well for me. I was able to qualify in third, transfer directly to the main after my heat race, and I got an awesome holeshot in the main event, which was really nice to accomplish. I was happy with how the whole weekend went. We made a lot of progress, and I'm looking to carrying that momentum into Phoenix this weekend.

Plus, check out the 2017 YXZ1000R Pure Sport Side-by-Side on display and tricked out with all sorts of cool Genuine Yamaha Parts and Accessories.

Check out "YamahaMotorUSA" on your favorite social media site.