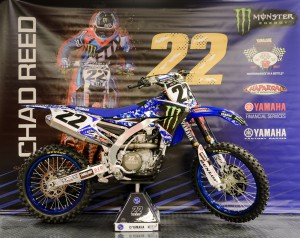 Round Two of the 2017 Monster Energy Supercross Championship, will take on a decidedly patriotic tone this Saturday for the Military Appreciation Race at Petco Park in San Diego. The Monster Energy/Yamalube/Chaparral/Yamaha Financial Services/Yamaha Factory Racing Team will be decked out in style, with two-time Supercross Champion Chad Reed (#22) and two-time 250 West Supercross Champion Cooper Webb (#2) wearing special commemorative gear. And, of course, Chad's and Cooper's Yamaha YZ450F machines will feature special, one-off livery to mark the occasion.

Last year in San Diego, Chad got a great start out of the gate to win the SupercrossLive.com Holeshot Award, and he went on to finish second in the 450SX main event. Cooper, who was competing in 250SX West last year, charged through the field and into the lead in the 250SX main event. He quickly pulled away at the front to take the checkered flag by more than three seconds for the second Petco Park Supercross victory of his career. Both riders are hoping that their San Diego good fortunes continue this weekend.

"San Diego is one of my favorite races of the season," Chad said. "It was where I competed in my first-ever Supercross race in the U.S. and, since 2002, San Diego has treated me very well. I'm proud that the fans call me "Mr. SD" because I'm the winningest rider at San Diego. And, after a terrible round one, I'm excited to try to turn things around this weekend."

"I'm really looking forward to San Diego, and getting my second 450 race under my belt," Cooper commented. "At Anaheim, there was a lot of nerves and a lot of pressure, so I'm looking forward to San Diego. I had a lot of success there in my 250 career, and I'll have another week on the YZ450F, to test and kind of work on some things that came up last weekend. With it being the Military Appreciation Race, it's a huge honor to be able to race in front of all the service men and women who protect our freedom. I'm looking forward to meeting a lot of them, plus, the cool bike designs with all the camo and the gear will be great to see, along with being in downtown San Diego."

Plus, check out the 2017 YXZ1000R Pure Sport Side-by-Side on display and tricked out with all sorts of cool Official Yamaha Parts & Accessories.

Cheer On The Participants In The Military Holeshot Challenge

On Saturday night, during an intermission at the San Diego Supercross, six selected members of the U.S. Army, U.S. Navy, U.S. Air Force, U.S. Marines, U.S. Coast Guard, and a Combat Veteran special guest will participate in the Military Holeshot Challenge. A U.S. Navy serviceman will be aboard a Yamaha YZ250F, as our newest member of the Yamaha bLU cRU. Go Navy! Go Yamaha!