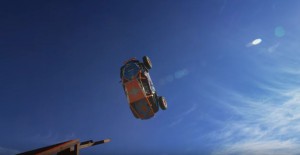 We will be just over two weeks into the new year when 2017 will get flipped on its head when RJ Anderson and the Mad Media crew release the fourth installment of the highly popular XP1K series, XP1K4.

Three years ago the UTV industry went nuts when a video was released showing prodigy championship off road racer, RJ Anderson, treating a Polaris RZR XP like it was a toy as he whipped, drifted, jumped and slung the UTV around insane obstacles and sailed it over incredible jumps like it was on the ultimate Hot Wheels track. With the internet filled with plenty of Ken Block Gymkhana and motorcycle stunting videos, it wasn't until XP1k came out that we had been exposed to a professionally produced video that combined great cinematography and the exceptional skills of extremely talented driver into a UTV stunt video.

A collaboration between UTV Underground and Mad Media, the video was used to help promote the new high performance Polaris RZR XP 1000. Set in an abandoned Iron Mine just outside of Palm Springs, between the driving skills of RJ, unique camera angles, and wild stunts, the video was like watching the imagination of an 8-year old kid with a 1:18 scale model RZR and a homemade obstacle course unfold in real life. To this date that video has been watched more than 2.5-million times. Go ahead and add to the view count by clicking below.

The following year the team took to the forest for a setting that would be a little more familiar to the average off road enthusiasts. Off course they had to improve upon the stunts and tricks that amazed us in XP1K, so they built some natural terrain style obstacles that gave the impression of what it would be like to take a RZR on a downhill ladder trail mountain bike course. Right from the start the video set the bar high as the RZR was flown in and set atop a steep wooden downhill ramp via helicopter. That initial drop down the mountain side and the ensuing jump sent RJ soaring through the air over a record-setting 100 foot gap. Even after overshooting the landing RJ still managed to handle the touch down as though it was nothing more than a minor bump in the course. This video introduced us to some pretty awesome visuals, a RZR doing skateboard style tricks with a 50-50 grind on some downed logs over a stream and wall riding a rocky mountain side. The best stunt in the video however is when RJ whirled the RZR around the wall of death. Defying gravity, the 1,400-lb plus RZR clung to the wall like a fly as the overhead shot shows the wooden planks flexing outward and ready burst into an explosion of wooden shrapnel with each revolution of the UTV. By far a favorite of the internet, XP1K2 has been view nearly 4 million times.

Last year we were taken to the Rustbelt where we witnessed some of the desolation and decay around Youngstown, Ohio's, once bustling steel industry as RJ ripped through abandoned steel mills, factories and rail yards. Where XP1K2 was all about wood and natural, lush scenery, XP1K3 was all about steel and deterioration. We are treated to RJ running in, out, and through crumbling factories and over scrapped rail cars. Highlights include skimming across overgrown railroad tracks, jumping over train cars and dump trucks, and clearing a two-story launch through the corner of a blown-out building. Not quite as popular as the previous two, XP1K3 has only garnered 1.6 million YouTube views-still absolutely nothing to sneeze at.

A week into December UTV Underground treated us with an early Christmas gift by dropping an XP1K4 teaser video, UT Underground Presents: RJ Anderson's XP1K4 - Inside The Mind's Eye. In this short video we get to hear from RJ as he explains what's going to through his mind as he plans and attempts the stunts in these videos. Of the few clips shown in this video we see RJ and professional freestyle MX rider Jackson "Jacko" Strong toying with each other on the course--could this mean the video may be a play on the old hoops game H.O.R.S.E.? However, instead of a basket and ball the game is played with a RZR and dirt bike? The last clip in the video shows RJ flying off a ramp as the RZR begins to rotate into a backwards flip. That clip alone is enough to get one drooling for the full video which is due out 1/17/17. See for yourself here.