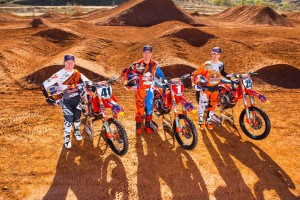 With back-to-back Supercross champion, Ryan Dungey, looking for a three-peat, the 2017 Red Bull KTM Factory team is a force to be reckoned with. Sporting two veteran riders, Dungey and Trey Canard as well as sophomore phenom Mavin Musquin, the Factory KTM 450 SX-F team is poised to make a big impact on the 2017 Supercross season.

Dungey and Musquin have been having a good 2016 all-around. Dungey got his second SX 450 Championship, and Musquin finished in seventh place his rookie season in the premier class and won the rookie of the year award. Dungey and Musquin also finished 2nd and 3rd overall respectively at the Monster Energy Cup in Las Vegas. More recently Musquin was crowned the Open Class champion at the Red Bull Straight Rhythm, going undefeated and beating out teammate Ryan Dungey in the final round to clinch the title.

While Canard is coming off a tough MX season where he was on the sideline for several races due to injury he did finish 9th overall in the 2016 Supercross series. The 2017 Supercross season will be a fresh start and extremely exciting for Canard as this will be the first time in his professional career that he will be riding something other than a Honda.

Here's what the team has to say about the upcoming season: