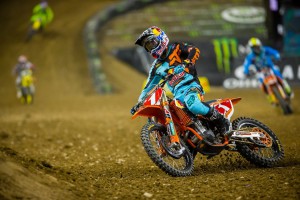 There have a been a few changes in regards to professional racing numbers for Monster Energy Supercross riders and Lucas Oil AMA Pro Motocross riders with today's announcement from the American Motorcyclists Association (AMA). The biggest change that my raise an eyebrow or two by hardcore fans is Cooper Webb dropping his number 17 and picking up number 2 as his new career number. Previously the number 2 was carried by racing icons Jeremy McGrath and Ryan Villopoto who announced his retirement in 2015.

Another bit of interesting info gleaned from today's announcement for professional competition numbers for pro-licensed riders in the AMA SX and MX series for the 2017 season, was that Joey Savatgy dropped his 37 and picked up Webb's old 17 number. Aaron Plessinger and Alex Martin were both up for career numbers, however both chose to stick with their current numbers, 23 and 26 respectively.

The 2017 season will see Cooper Webb move up from the 250cc series and join teammate Chad Reed aboard a factory Yamaha YZ 450F.