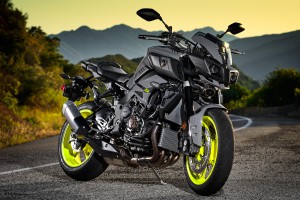 It's a pattern that's been going on in the automotive and motorcycle industry for years and it frustrates la lot of enthusiasts. I'm talking about the act of releasing a new vehicle model to only certain regions or markets. This can be done for several reasons such as country or government restrictions/regulations, taxes/fees, market demand, or manufacturers wanting to test public response etc. Last year this happened when Yamaha announced the new MT-10 to the European markets but didn't release a US version-until now. This past June Yamaha released the U.S. version of the MT-10 and dubbed it the FZ-10.

The new FZ-10 is the rebellious fraternal twin to the more sophisticated Yamaha YZF R1. They come from the same womb and share much of the same DNA but looks and performance-wise are rather different-most noticeably the FZ-10 is much edgier than the refined R1, wears way less clothes, and falls into Yamaha's sport category as opposed to the super sport line. The FZ-10 features the R1's 998cc crossplane crankshaft inline-four engine, however the hi-po, track-oriented engine has been retuned and features a change of internals to help lower cost (the R1 engine features magnesium and titanium bits). As opposed to the R1, the mill in the FZ-10 delivers more in the low-end (peak torque of 81.8 ft-lbs hits at (9,000 rpm) and puts out a claimed 158hp. A slipper clutch helps smooth out power delivery and downshifts while climbing up and down the 6-speed trans. Transmission internals and gear ratios are pretty much the same however, a change of rear sprockets from 41 teeth on the R1 to 43 teeth on the FZ-10 help change the FZs power delivery. The aluminum Deltabox frame is derived from the R1, the difference being the FZ has a steel subframe to help with heavier loads (i.e. a passenger or luggage). 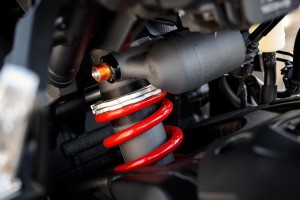 Suspension for the FZ-10 comes by way of a fully-adjustable inverted KYB front fork and a four-way-adjustable, linkage-type, KYB single rear shock. The FZ- is loaded with electronics to deliver a custom tailored ride and safety. There's Yamaha's Chip-Controlled Throttle (YCC-T), cruise control, and D-mode which offers three riding modes that can be selected between standard (STD) mild (A) and wild (B). Standard offers the smoothest power delivery, A mode adds a bit more oomph earlier in the throttle opening, and B is all out, which can lead to quick little head snaps for those not accustomed to handling twitchy power. There's also a Traction Control System (TCS) that assists the rider in managing traction on various road conditions by quickly modulating throttle opening, ignition timing, fuel volume and other parameters. 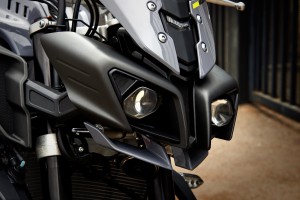 While the new FZ-10 may deliver a highly spirited ride and be the ultimate street bike for wreaking havoc across the highways and avenues (I am talking burnouts and wheelies), the angular lines and extremely robotic looking LED headlights, and mini cowl may be pretty polarizing for some. Some people have commented that it looks like a Transformer, I on the other hand am reminded of ol' Johnny Five from Short Circuit-I'm just waiting for one of those wings on the front cowl to twitch like an eyebrow. One thing is for sure, no matter where you ride with this bike you'll definitely stand out and stand up (I am talking about wheelies again).

The FZ-10 may share a lot of DNA with the R1, but it's part of the FZ family, ranking in at the top amongst its smaller siblings the FZ-07 and FZ-09. What many may like about the FZ-10 is that they can enjoy much of the similarities of Yamaha's R1 Superbike ($16,490-base model) without paying the super price. Others however, may complain about the nearly $5K price difference between the FZ-10 ($12,999) and the FZ-09 ($8,190), but when you look at everything you get with the FZ-10 such as Assist and Slipper Clutch, Drive Mode, ABS, traction control, cruise control, and more it becomes well worth the money. The FZ-10 is currently available in Armor Gray and Matte Raven Black with red accents.