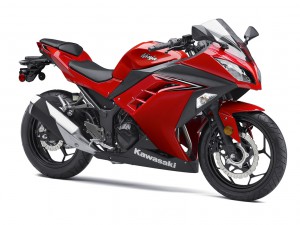 MPG: 70 (according to Wikipedia)

If you like having a variety of choices then look towards the Ninja 300. Aside from the base model (seen here) you can choose from either an ABS version, an KRT Edition with ABS, or an SE version. Other than ABS the only difference amongst the other R3s is the special graphics and paint schemes. While the Ninja may have the largest gas tank compared to the Honda and Yamaha, when looking at the three you don't even notice the extra gallon capacity. The tank looks svelte and flows well with the body work, plus if you hate stopping for gas the ability to log an extra 70 to100-plus miles between gas stops is a huge advantage. If you're going to be doing a lot of 2-up riding it should be noted that the Ninja 300 has the very pronounced rider/passenger seating area with the passenger seat resting significantly higher than the Honda. This will help the passenger to peer over the rider's shoulder, but can also change up weight distribution and handling. 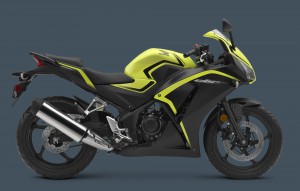 Nipping at the heels of the popular Ninja 300, Honda added 8mm of stroke to the single cylinder CBR250R, increasing displacement from 249cc to 286cc, and introduced the CBR 300R as an early 2015 model. The Honda team didn't just boost displacement and call it a day however, the 300R features lines and body work similar to its biggest brother, the extremely potent CBR 1000RR. If boasting about power output is extremely important to you, then CBR 300R may be the true entry-level bike in this comparison. While it punches right in line with the R3 and Ninja in peak torque, when it comes to peak horsepower, the single cylinder powerplant gives up more than a handful of ponies. This doesn't mean beginning riders can't have fun with the bike, as it's got plenty of pep to whip you in and out of corners. Extremely skilled riders will take great pleasure in putting the competition in its place despite the power deficiency. The CBR300R has the flattest rider/passenger seating area. 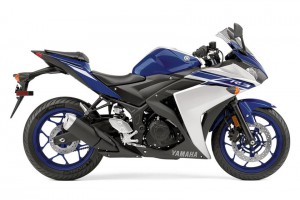 Released after the CBR 300R, the