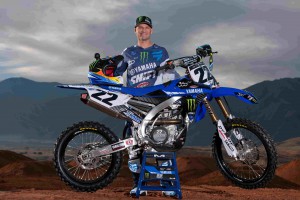 , U.S.A., today introduced its 2017 Factory Supercross/Motocross team, featuring riders Chad Reed and new teammate Cooper Webb. Both riders were introduced, in person, during the Yamaha bLU cRU Family Dinner at Loretta Lynn's Ranch, which is where the AMA Amateur National Motocross Championship is being held.

'Last year, we re-introduced our Yamaha Factory Racing Supercross team, with Chad Reed as our rider, and he did an excellent job for us, both on the track and with the fans,' said Keith McCarty, Motorsports Racing Division Manager for Yamaha Motor Corporation, U.S.A. 'He helped re-energize our Factory program, and it was great see how much all the fans enjoyed seeing him race once again for Yamaha. We're thrilled to have Chad back with us again for the 2017 season, and we're also pleased to announce the addition of Cooper Webb as Chad's teammate on our Factory Racing team. 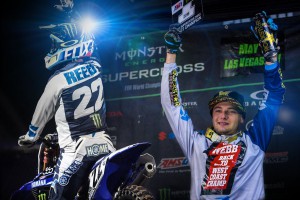 'Cooper had a tremendous Supercross season, in which he won his second consecutive 250SX West Championship,' McCarty said. 'Also, he is currently sitting atop the points standings in the AMA 250cc Motocross Championship with a 51-point lead. He is a fierce competitor who is brimming with talent and determination, and we're excited to have him join our Factory Racing team with Chad as his teammate.

'We're also happy to be able to make this announcement--and have both Chad and Cooper there in-person--during our Yamaha bLU cRU Family Dinner at Loretta Lynn's Ranch. Our Yamaha bLU cRU Amateur Racing program is a great launching pad for future professional Supercross and Motocross stars. In fact, both Chad and Cooper got their first starts in racing aboard Yamaha PW50s.'

Cooper, especially, is proof-positive that riding Yamahas as an amateur is a great way to step up to the pro level. As a Yamaha bLU cRU Amateur racer, he won two AMA Amateur National Motocross Championships, 9 Winter-Olympics Amateur Championships, a Monster Energy Cup Amateur Championship, and a whole host of other amateur racing titles, which led to him turning professional and continuing his success aboard Yamahas.

When asked about racing Yamahas as an amateur and the opportunities that it gave him to step up to the pro ranks, Cooper said, 'The bLU cRU is the perfect amateur program, especially for the way my career developed. When I first started racing on a Yamaha PW50, I wasn't sure what my career path was going to be. But, as I continued to grow and develop as an amateur, I raced Yamahas, which enabled me to transition from the bLU cRU Amateur Program to the Yamalube/Star Racing/Yamaha team where I won my first professional Championship. Then, being selected for the Motocross of Nations, and signing this 450 deal with the Yamaha Factory team. It's been an awesome journey so far. To all the bLU cRU riders, I just want to add that I did it, and you can, too. The bLU cRU is the perfect pathway to the pros!'

'I'm really excited to be joining the Yamaha Factory Racing team,' Webb continued. 'It's a dream come true for me, especially to be able to stay with the brand where I started my professional career. Also, it's going to be great to team up with Chad. I met him a long time ago, and growing up, he was always my favorite rider. So, to be teammates with a legend is awesome. It's going to help me tremendously to learn from him, and I can't think of a better teammate to have as I move up to 450s full-time.'

Chad is looking forward to the 2017 Supercross season, and he welcomes Cooper as his teammate on the Yamaha Factory Racing team.

'I'm excited to get back to work with the Yamaha guys,' Reed said. '2016 was a great learning and rebuilding phase for me and for Yamaha going racing as a factory team again. We learned the bike and found our strengths and weaknesses. It's a huge positive that we are able to use this time wisely to prepare for 2017, and the team and I are motivated to continue building. I think Cooper brings a new level of energy to the team. Youth has that natural way of upping the enthusiasm! I like that energy, and I'm looking forward to having him as my teammate.'