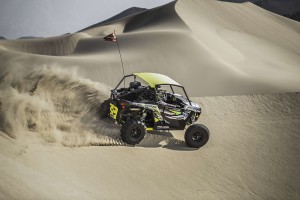 Polaris, the worldwide leader in off-road vehicles, is announcing 11 new models, several product enhancements, and a new, ground-breaking technology that expands the off-road riding experience like never before. The 2017 news stems from Polaris' relentless pursuit of innovation, and its commitment to building the very best off-road solutions for its riders. 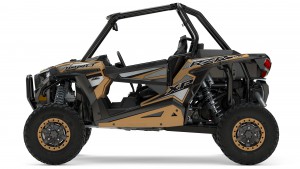 Polaris RZR has defined recreational side-by-sides by offering the broadest line of vehicles including trail, high-performance and four-seat offerings, all of which have the ultimate combination of power, suspension, agility, comfort and customization.

For razor-sharp performance for the trails and rocks, Polaris is introducing the new RZR XP 1000 EPS Gold Matte Metallic Limited Edition. The vehicle offers all of RZR XP's hallmark performance versatility to dominate it all with unique features for premium trail riding and rock crawling that include: a new 55-percent-lower low gear; all-new Xtreme Performance All-Wheel Drive (AWD) system; and a factory-installed, turnkey accessory package with premium trail and rock accessories. For the off-road enthusiast who wants a premium ride and handling at a value, Polaris is introducing the new 45-horsepower RZR S 570 EPS, the best 60-in. (152.4-cm) Sport Side-by-Side under $13,000 U.S. The vehicle offers another opportunity for price-conscious and new consumers to enjoy the RZR experience with a passenger, and to join the thousands of people who already ride RZRs. 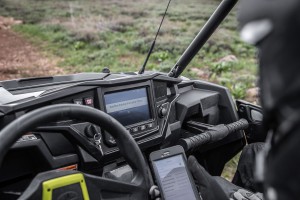 For the first time, Polaris is introducing a vehicle enabled with Ride Command. Ride Command was created based on the recognition that while off-road riding is often intended to be a social experience, in reality it is often disconnected, due to the inability to communicate with passengers and other vehicles, losing members in the group during a ride, and trying to integrate different gadgets such as cell phones and GoProÂ® cameras.

Ride Command is a unique solution that solves the most common experiential problems with off-road riding by connecting the disconnect. With the Ride Commandâ„¢ app and an intuitive, weather-resistant Ride Commandâ„¢ 7" (17.8-cm.) Display, the system connects people to their machines and people-to-people for a more social off-road experience. Users are able to map rides in advance and transfer waypoints from their phones to the display via BluetoothÂ®, plan and share their ride stats, and track their friends' locations while riding. In addition, drivers can integrate devices such as mobile phones to receive messages and play music, control their go GoPro, and sync Sena headsets to talk to passengers all through the Ride Commandâ„¢ 7" (17.8-cm.) Display. Ride Command is available on the RZR XP 1000 EPS Velocity Blue Limited Edition and as an accessory through Polaris Engineered Accessoriesâ„¢. 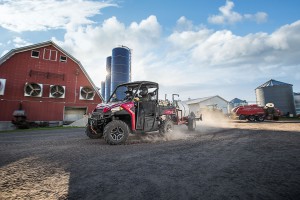 Polaris RANGER is the industry's No.1 selling utility vehicle (UTV) lineup offering the most-comprehensive and versatile family of vehicles for hunt, farm, trail and mud.

For Model Year 2017, Polaris RANGER raises the bar with the introduction of the world's most powerful family of UTVs. For even more extreme performance, Polaris welcomes the new 80-horsepower RANGER XP 1000 and CREW XP 1000 vehicles, highlighted by base, EPS and new special editions. Along with the core models, Polaris again leads the industry with innovative, special editions including two new High Lifter mud editions in Full-Size and CREW; the hard-working RANGER XP 1000 EPS Ranch Edition; and the industry's first gas-powered UTV with heating, ventilation and air conditioning (HVAC) on the RANGER XP 1000 EPS NorthStar HVAC and CREW HVAC Editions. 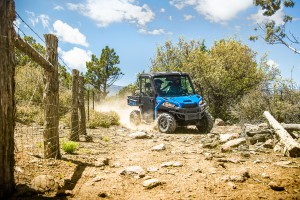 With the introduction of the new RANGER XP 1000, Polaris is offering its best-selling side-by-side of all time, the RANGER XP 900, at an unprecedented value. For $1,200 less than previous years, customers can own a premium, full-size vehicle at an unmatched price and experience all the features of one the most awarded side-by-side lineups. The price reduction is available on the in-mold base and Electronic Power Steering (EPS) models. The RANGER CREW 900 models also will be offered at $1,000 less than previous years. 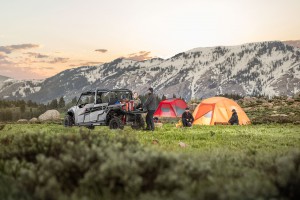 The Polaris GENERAL set a new standard in off-road comfort and refinement - built to work hard and play harder - when it was introduced in November 2015. With class-leading features needed to tackle the trails and a work ethic to handle tough jobs, the Polaris GENERAL has become one of the hottest side-by-side offerings on the market.

For Model Year 2017, Polaris answers the demands of consumers with the new benchmark in multi-passenger comfort, the Polaris GENERAL 4 1000 EPS. The GENERAL two-seat models are further enhanced with VersaTrac Turf Mode and a new Hunter Edition featuring Polaris Pursuit Camo. 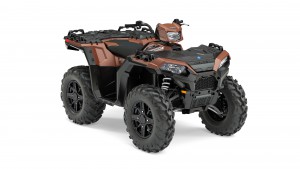 Polaris All-Terrain Vehicles (ATV) have been the No. 1 selling brand of automatic ATVs* for several years because the lineup offers the best performance and best value.

For 2017, Polaris is redesigning, renewing and reintroducing its flagship lineup of high-powered SportsmanÂ® ATVs to offer a perfect blend of features and performance for an all-new Sport/Utility experience. The vehicles offer a new rider-active design for the most sport-like experience ever on a Sportsman, in addition to delivering even more utility. To cater to a wide-variety of big bore customers, the lineup has three, new standard models: the Sportsman XPÂ® 1000, Sportsman 850 SP and industry's best value big bore, the Sportsman 850. In addition to the standard models, the Sportsman XP 1000 is available in a Hunter Edition package and ultra-premium Matte Copper Limited Edition.

For the entry-level Recreational/Utility customer, the Sportsman 450 H.O. is the most fully featured, best value entry-level class ATV available. For less than $6,000 U.S. for the standard model and less than $7,000 U.S. for the Electronic Power Steering (EPS) version, the vehicles offer an unprecedented value. The vehicle's smooth, reliable Prostar 499cc engine delivers 33 horsepower, offering Full-Size capability and performance at a value price. The Sportsman 450 H.O. also is offered in a Utility addition, along with a Sportsman 570 EPS Utility Edition, for the utility-minded, farm or ranch customer. The vehicles have the same Sportsman legendary smooth ride with a new, harder working utility package for more hauling, more versatile towing and heavy-duty protection. 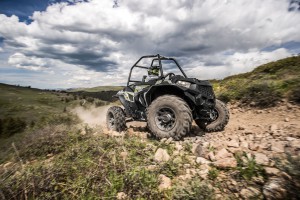 Polaris ACE offers an entirely unique off-road experience with the revolutionary, sit-in chassis that combines the nimble handling and center-seating position of an ATV with the security of a side-by-side. Built specifically for those who want the ease-of-use of a side-by-side but do not want or need a second seat, the lineup offers customers the freedom of controlling their own riding experience along with the ability to enjoy the biggest off-road adventures.

For Model Year 2017, the ACE family takes a big step forward as Polaris is delivering everything customers have asked for: a more powerful and affordable entry-level model, and the performance and ride quality of dual a-arms on a 48-in. (121.9-cm) trail-capable vehicle. And, for the customers who want big power and suspension, Polaris is introducing the all-new, 78-horsepower, 59-in. (149.9-cm) wide, long-travel suspension Polaris ACE 900 XC. 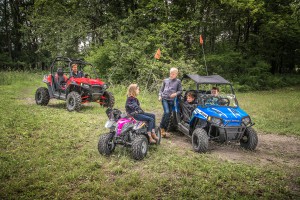 Polaris' Youth line up will include four 2017 ATV youth models, the Phoenix 200, Outlaw and Sportsman 110 EFI, and Outlaw 50 based upon the Specialty Vehicle Institute of America's (SVIA) ATV categories. Polaris also will offer the RZR 170 EFI as a youth side-by-side model. For 2017, the entire youth lineup will see new colors.