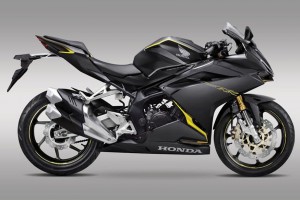 There's been big buzz today about a new small displacement sport bike announcement from Honda. We first saw images of the CRB250RR last year at the Tokyo Motor Show when the bike was revealed as a concept model. Today it was announced that the CBR250RR would be released as a 2017 model for the Indonesian market-we are still awaiting official word as to when/if the bike will be available in the U.S..

The CBR250RR sports a brand new liquid-cooled, 249.7cc, 4-stroke, 8-valve parallel twin engine backed by a 6-speed transmission. The drivetrain is housed in a truss-style frame and features an inverted frontend and an adjustable rear monoshock Pro-Link suspension system connected to an aluminum swingarm. Outfitted with throttle-by-wire with accelerator position sensor and 3 selectable ride mode settings, the CBR250RR should prove to be a fun little machine for both entry level and advanced riders. 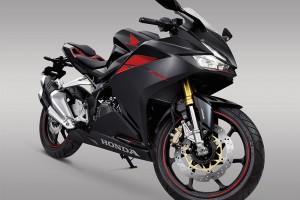 The CBR250RR sports a 31.1" seat height, 3.8 gallon gas tank, and 17" wheels with a 140mm rear tire and 110mm front tire. The most stand out aspect of this new bike is it sculpted bodywork. Extremely aggressive styling with plenty of sweeping curves and sharp angles, the front beak of the CBR250RR with its dual stacked headlights looks like a menacing predator about to rip its prey apart. Honda will offer a standard and ABS version in either Racing Red, Anchor Grey Metallic, or Mat Gunpowder Metallic. If Honda does bring the CBR250RR to the U.S. it should definitely stir the pot amongst sport bike fans-but would need an increase in displacement to be pop up on the radar of those eyeballing a lightweight machine like the Yamaha YZF R3, KTM RC 390, or Kawasaki Ninja 300.