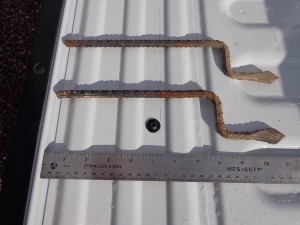 A photo of a booby trap that was found in 2014, courtesy of the Arizona Game and Fish Department.[/caption]

Motorcyclists and all-terrain-vehicle riders in three states have discovered booby traps along trails on public lands that place riders, hikers and others at risk, the American Motorcyclist Association reported today.

In Idaho, Massachusetts and New Hampshire, someone or some group is deliberately trying to harm off-highway-vehicle riders who use trails on public lands. Booby traps also have been reported in recent years along trails in Arizona, Colorado and New Mexico.

"This type of activity is extremely dangerous," said Rob Dingman, AMA president and CEO. "A motorcyclist who hits one of these traps can be seriously injured or even killed. We want anyone with information about these tactics to contact law enforcement immediately."

"The AMA is issuing AMA Action Alerts to riders in areas where these incidents have occurred," Dingman said. "But, at the same time, riders everywhere should use due caution on the trails, because we know there are people out there who would do us harm."

In addition to contacting local law enforcement authorities, the AMA asks that you send an email to grassroots@ama-cycle.org about these incidents, so other motorcyclists can be alerted. Sign up for AMA Action Alerts at www.americanmotorcyclist.com > Rights > AMA Action Center.

About the American Motorcyclist Association

Founded in 1924, the AMA is a not-for-profit member-based association whose mission is to promote the motorcycle lifestyle and protect the future of motorcycling. As the world's largest motorcycling rights and event sanctioning organization, the AMA advocates for riders' interests at all levels of government and sanctions thousands of competition and recreational events every year. The AMA also provides money-saving discounts on products and services for its members. Through the AMA Motorcycle Hall of Fame in Pickerington, Ohio, the AMA honors the heroes and heritage of motorcycling.