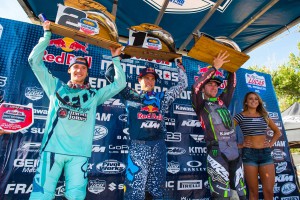 Dungey got off to a great start in Moto 1 as he assumed the early lead in the race. The reigning 450 Class Champion led the first eight laps of the race until Roczen made a pass for the lead just after the halfway point.

However, with a hard-charging Dungey in tow, Roczen succumbed to a bike issue with only a few laps left to go. From there, Dungey capitalized on Roczen's situation in order to overtake the lead and finish strong to capture the Moto 1 victory. 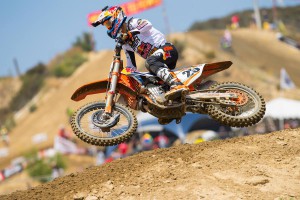 Red Bull KTM Factory Racing's Marvin Musquin powered his KTM 450 SX-F Factory Edition off the start to begin the race inside the top five. Musquin passed his way up to 3rd where he remained for a few laps before dropping back a few positions. Musquin continued to fight for a top-five position throughout the entire race where he ended up crashing on the final lap in the "Supercross section" of the track. The 450 Class Rookie rebounded as quickly as possible to salvage 9th place in Moto 1. 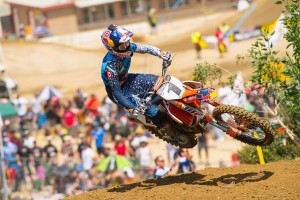 In Moto 2, Dungey was quick off the line as he rode nearly side-by-side with Roczen through the first turn. Dungey got the early advantage but it was Roczen who overtook the lead on the opening lap. Dungey was able to make gains on the leader of Roczen several times throughout the 15-lap race but ultimately wasn't able to make any advances.

With a win behind him heading into Moto 2, Dungey was able to secure the overall victory with 1-2 moto finishes, while Roczen ended the day in 2nd overall with 4-1 moto scores.

"The day was overall pretty good," Dungey stated. It's always positive to gain ground in the championship points and get an overall win. It's not a 1-1 but hey, we'll take it and keep building on it. I feel like my riding is really good, the bike set-up is right there and - if anything - there are a lot of positives to take from it. I know physically I can improve, and also on the track in certain areas, so we'll fine tune a few things and keep moving forward."

Musquin got off to an unfavorable start in Moto 2 after getting caught in a pack of riders across the finish line, causing him to run off the track and lose several positions in the process. From there, Musquin worked hard to reclaim his ground but was only able to get up to 11th place in Moto 2. Musquin ultimately finished 9th overall with 9-11 moto scores.

"I'm disappointed with my day," Musquin said. "I kind of struggled on the track. I made mistakes and it was hard to get back in the right rhythm afterwards. Next week we'll be back in Florida to get more work done and hopefully come back stronger for the next weekend in Colorado."