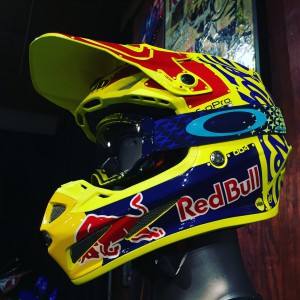 You don't have to be a sports fan to know that chronic traumatic encephalopathy, more commonly known as CTE, has been a huge topic of discussion over the past couple of years. The Concussion Foundation defines CTE as is a progressive degenerative disease of the brain found in athletes, military veterans, and others with a history of repetitive brain trauma. Most commonly you'll hear the term in reference to NFL players and the repetitive concussions many players experience during their career. Symptoms of CTE can come on early or years later and can result in memory loss, confusion, impaired judgment, impulse control, aggression, depression, and even dementia.
With more and more instances of former players being diagnosed with CTE it has piqued the interest and caused alarm for many parents whose children currently or have played pop warner or high school football. However, it's not just football players that are subjected to repetitive hits to the head which can lead to CTE, there are many other sports and activities that are susceptible to CTE as well--most notably, would be motocross racing.

Just like football, motocross racing is an activity in which there is the possibility of head trauma, whether it be the rider striking their on the handlebars, another rider, or the ground. Most racers spend several years if not a decade or more competing, so the possibility of multiple instances of head trauma or concussions becomes more likely. And just like NFL players, the most important part of the uniform or the gear is the dirt bike helmet. 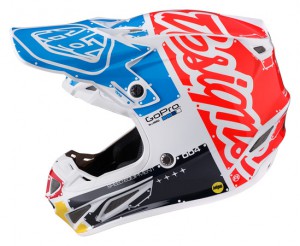 As the discussion about CTE continues to evolve, so do the efforts to create better gear to help protect athletes. One such company that has put motocross racers head protection and overall health at the forefront of their product line is Troy Lee Designs with its brand new SE4 Motocross helmet. 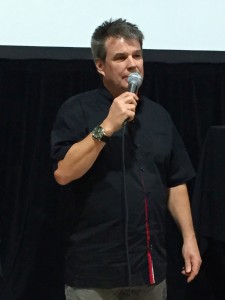 More than 30 years ago Troy Lee started custom painting and modifying motocross helmets, and from those early beginnings his company Troy Lee Designs (TLD) has evolved to encompass everything from MX jerseys and riding pants to offroad protective wear and dirt bike helmets, of course he still paint his fair share of custom helmets as well. In developing TLD's latest product, the SE4, the company spent more than 3,800 hours in development and created 350 prototype crash helmets all in the name of rider safety.
With the tag line "Your safety is my priority," Lee and the TLD team set out to identify high impact areas and then repetitively conducted multiple impact tests at various heights and speeds. With each test they continued to refine and improve the [mageProductLink sku="tl-102008101" title=""]SE4[/mageProductLink] concept until they had a product that not only exceeded certifications for Snell, DOT, ECE and AS/NZS 1698, but also beat out its competition.

Two of the main safety features of the SE4 are increased Expanded Polystyrene (EPS) in key areas and the use of the Multi-directional Impact Protection System (MIPS). EPS has a wide variety of uses and is the same material that's used to make those ice chests you pick up at the gas station or those annoying peanuts that fall all over your floor when you open a package. Lightweight and great at absorbing impact energy without bounce-back, EPS liners have been used in motorcycle helmets for years. With the majority of impacts occurring in the headband area TLD sought to reduce the force by increasing the amount of EPS in the frontal headband area. They also added more EPS to the top and rear parietal zones.

Besides the skull, the brain's other defense system is Cerebrospinal fluid which in the simplest explanation acts like a liquid shock absorber to protect the brain from impacting the skull. When hitting an object with your head it's the sudden stop or rotation of the head upon impact with a force so strong that the cerebrospinal fluid can't protect the brain from hitting the skull that can cause the most harm.

While relatively new technology (in motorcycle helmet standards) the MIPS system was created by a group of neurosurgeons and scientists with a focus on the biomechanical field at the Royal Institute of Technology in Stockholm, Sweden. Acting as a low friction layer between the outer shell and the liner (EPS in this case) the MIPS system reduces rotational forces set upon the brain when subjected to angled impacts. With its elastomeric attachment system, the MIPS layer enables the outer helmet to slide or rotate separately from the head. Essentially the MIPS system is sort of like the Cerebrospinal fluid for the helmet.

MIPS testing:
There are many other great features incorporated into the SE4 helmet as indicted below by TLD: 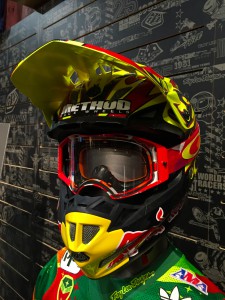 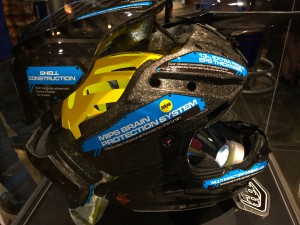 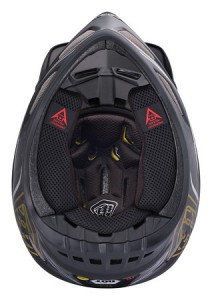 The TLD SE4 is available in four designs: Twilight (navy or white), Pinstripe (black or navy), Factory (white or yellow), and solid black.