(May 9, 2016) - Just two weeks remain until the gate drops on the 2016 Lucas Oil Pro Motocross Championship, sanctioned by AMA Pro Racing, as the legendary GoPro Hangtown Motocross Classic will serve as the setting for the opening round of the 12-race season on Saturday, May 21. This highly anticipated season, in which Red Bull KTM's Ryan Dungey and Yamalube/Star Racing Yamaha's Jeremy Martin look to defend their respective 450 Class and 250 Class titles, will be commemorated by the celebration of 50 years of American motocross.

Tickets to all 12 rounds of the 2016 Lucas Oil Pro Motocross Championship are on sale now at the official series website, www.ProMotocross.com. 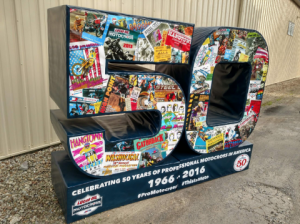 
The Lucas Oil Pro Motocross Championship's celebration of 50 years of American motocross will be symbolized by a traveling "50" sculpture. This one-of-a-kind monument is filled with artwork from the numerous championship programs of the Nationals, ticket stubs, Hi-Flyer trading cards, and other mementos that pay homage to the sport's illustrious history. Fans attending any round of the championship this summer will have an opportunity to check out the sculpture in person at the sponsor village of the paddock.


Back in 1966, a visionary promoter by the name of Edison Dye recognized the growing popularity of motocross overseas and subsequently helped facilitate a bold move that would go on to change the course of history for the sport in America. Dye helped bring Husqvarna rider Torsten Hallman to the United States, making him the first professional European rider to compete in America. The Swedish rider's influence was felt almost immediately and soon enough more and more Europeans followed Hallman's footsteps overseas, with many of them ultimately becoming incredibly influential legends of the sport's early era. AMA Motorcycle Hall of Fame members like Joel Robert and Roger DeCoster propelled the sport's popularity and professionalism in America thanks to their exceptional talent and captivating personalities.


In the 50 years since Dye's groundbreaking initiative and Hallman's pioneering journey to the U.S., the sport of motocross has evolved into the spectacle that it is today, as one of the most compelling and physically demanding athletic competitions on the planet. The United States is now the premier destination for motocross, with its most celebrated championships. The various disciplines and racing series that encompass the world of motocross can now be seen live on televisions, tablets, and cell phones across the globe, with hundreds of thousands of fans all over the world captivated by the action unfolding on the racetrack. Motocross has ultimately always held on to its renegade, rule-bending roots, and as a result it maintains a thrilling and daring perception that keeps fans yearning for more while continuing to elevate on a global level, with world-class athletes from all over the world coming to America for a chance at chasing their dreams.


In 2009, MX Sports Pro Racing secured the promotional and operational rights of the Lucas Oil Pro Motocross Championship, and that same season they introduced perennial championship trophies for both the 450 Class and 250 Class - the Edison Dye Cup (450 Class) and Gary Jones Cup (250 Class) - which were created to honor the entrepreneurial vision of Edison Dye that brought the sport to America as well as the first ever national champion crowned in a formal U.S. motocross championship.