After years of waiting, countless rumors, and a series of cryptic teaser videos, in September of 2015 Yamaha finally pulled the cover off its hot new two-seater Side-by-Side (SxS), the YXZ 1000R. Touted in press releases and marketing materials as "the world's only pure sport Side-by-Side/UTV," the vehicle immediately had lofty expectations to meet. Since the reveal initial reviews and testing from various media outlets have been very positive about the performance and looks of the machine, so it seems the new kid in the sand box is living up to the hype.

For those of you that may have been holed up in a cave somewhere or your internet has been down for the six months, or maybe you just haven't gotten bitten by the UTV bug yet, here's a quick recap as to why the YXZ is so special.

With Can-Am and most recently, Polaris, having brought to market UTVs outfitted with turbos straight from the factory, simply boasting more horsepower wasn't going to be enough for Yamaha to deflate the tires of its competition. Basically the designers and engineers wanted to stun the SxS market and put the whole scene on its side with a "game changer". To do this they outfitted the Yamaha YXZ 1000R SE with a series of industry firsts like a sport-oriented, 998cc, three-cylinder powerplant with a high revving redline of 10,500 RMP, and a five-speed, sequential-shift, manual transmission.

The counterbalanced, liquid-cooled, inline triple engine, features a compact DOHC twelve-valve cylinder head and lightweight 80mm forged aluminum pistons. The punchy mill has a 11.3:1 compression ratio and delivers great power. The direct-drive, five-speed, manual trans is operated via a hydraulic foot clutch, and short-stroke, dash-mounted shift lever. For rugged terrain and softer situations Yamaha's On-Command 4WD system with full Diff Lock is just waiting to engage to get you up, out, or over.

The YXZ's extreme looks partially come from the exposed tops of the Fox shocks peeking through the front body work. The huge piggyback 2.5 Podium RC2 Shocks at all four corners are fully adjustable-spring preload, rebound and both high- and low-speed compression damping. Up front the car sports 16.2 inches of travel and has 17.0 inches of travel at the rear. The suspension features Bottom-Out technology as well as front and rear sway bars for predictable and smooth handling.

Where the YXZ may lack the horsepower of a factory turbo UTV, it more than makes up for it in its overall driving experience. Packaged with a high performance oriented chassis and suspension and covered with aggressive body work, the YXZ's manual transmission puts the driver into a more active role by allowing them to more precisely control the power and performance exactly as they see fit.

As with any new SxS, enthusiasts were not only eager to get their hands on this hot machine to test out for themselves, they were also eager to customize one and make it their own. We have to admit, we were very excited to get our first YXZ as well so that our UTV Mod Department could start giving it the ChapMoto treatment. What you see here is just the tip of the ice berg of what we will be doing with these new UTVs.

First things first, to bring the YXZ's horsepower output more on par with the top of the line boosted Can-Ams and RZRs a Mountain Performance Inc. turbo kit was installed. A complete bolt-on package the kit is comprised of a Mitsubishi stainless steel turbo housing assembly, Donaldson air filter, an industrial quality bar and plate style intercooler, electronic fuel controller, electronic boost and altitude compensation controller, stainless steel muffler and all necessary hoses and brackets. An extremely impressive kit, off of only 5psi of boost and running pump gas MPI states their turbo system will make upwards of 155-hp in desert conditions. With the RZR XP Turbo making a claimed 144-hp and the Can-Am Maverick X DS Turbo putting out 121-hp, this freshly boosted YXZ will spin circles around them. The only downside is this kit is not currently CARB compliant, meaning this machine can't be driven in California.

While it's not required equipment with the turbo, the decision was made to install Yamaha's optional Rekluse Clutch kit to make handling low speed technical terrain easier. The EXP clutch uses the principles of centrifugal force to automatically engage and disengage the clutch based on RPM and allows you to come to a complete stop in gear or roll extremely slow without having to manipulate the clutch pedal-and you won't stall it.

After upgrading the drivetrain, the ChapMoto UTV Mod team began working on the exterior of car. The stock cage was pulled off and in its place an AnnLynn Manx Radius Cage and accompanying roof were bolted in place. Compared to the boxy/angular look of the stock cage, the curved design of the Manx cage puts a radically different spin on the YXZ. With more of a stunt car look, the UTV now looks like it could take a tumble and pop right back on to its wheels. Of course better lighting is a key aspect of offroading so a 50-inch curved LED lightbar was bolted to the integrated mounts at the top of the cage. When riding in dusty night time conditions a 3-inch square, Totron 16W Cree L.E.D. Spot Light with Amber lens cover will help those at the rear keep tabs on the vehicle. And for those midnight dune runs a pair of white LED, 4-foot, SafeGlo whips with quick release mounts were secured to the top/rear of the cage.

Inside the cab the OE seats were tossed and replaced with a pair of custom lined PRP XC seats. A mix of black, white, and yellow leather with some carbon fiber paneling the new seats suit the 60th anniversary Special Edition (SE) Yamaha Yellow and black and white speed block livery perfectly. To help monitor the coolant a dash-mounted Trail Tech radiator hose temperature sensor was installed.

Finally, in order to keep in touch with those turbo RZR and Can-Am drivers that were left in the dust a PCI California Ultimate 2 Seat Bluetooth Communication System was installed. A mix between an in-car intercom system and a two-way vehicle to vehicle radio the PCI setup will allow the driver and passenger to easily communicate with one another without yelling and let others in your group know your twenty after you boost past them.

We've just scratched the surface of the custom potential of this radical new machine. There's plenty more mods we plan to do with future YXZ 1000Rs, but we'll save those ideas to reveal in future issues of TWM. Stay Tuned. 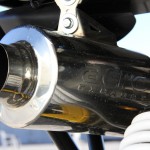 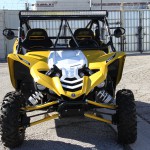 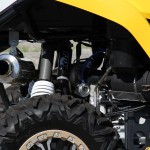 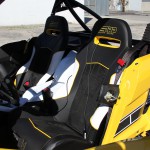 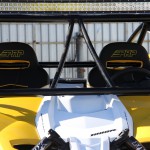 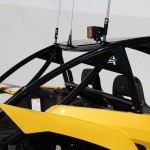 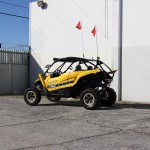 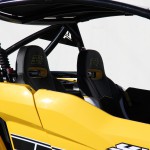 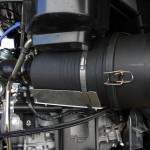 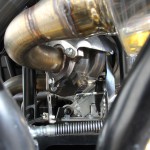