In this head to head comparison we look at MX neck braces. 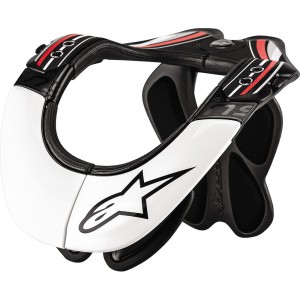 The frame of the [mageProductLink sku="020-2707-0099" title=""]Bionic Pro[/mageProductLink] is comprised of advanced high performance fiberglass polymer resin making it 20 percent lighter than the previous version yet durable and capable of withstanding hard impacts. The front opening/rear entry design allows for natural movement when putting the brace on and the heavy-duty magnet ensures easy and secure closure. A three-piece design, the rear stabilizer is keyed into the neck brace and can be removed with a twist. A quick release pull tab under the chin releases the magnet and opening the two halves to their furthest point enables emergency personnel to separate the two halves at the keyed rear center point for harmless removal. Adjustments can be made via the included replacement pads (5mm/10mm) at the shoulders, stabilizer, and chest as well as the replacement clips that bolt in place in the sides of the neck frame to change the sizing from extra-small to medium and large to extra-large. 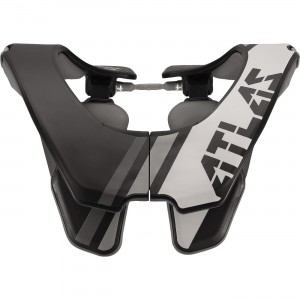 While all three neck braces are rather light, the [mageProductLink sku="372-0977" title=""]Atlas Air Covert[/mageProductLink] is the lightest of all three. Some may prefer this brace over the other two simply based on the fact that the center hole is large enough to slip your head through without having to open the brace. The unique split level frame design with the rear elastic band allows the sides to articulate and move independently and flow with body movements through turns. The chest and back braces are short and wide to provide better support and impact absorption across the body. A push button emergency release enables the front of the brace to separate for removal. The front chest brace acts as a damper providing 30mm of flex. Adjustments can be made at the rear via the rear support with six different positions in the mounts. 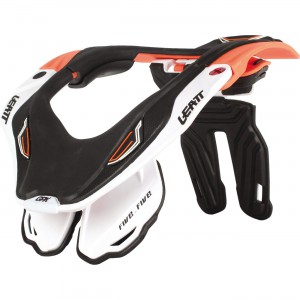 The[mageProductLink sku="3007-101402-0001" title=""] Leatt GPX 5.5 [/mageProductLink]offers the most options with four color ways to choose from and a wide range of adjustability. The chassis is made of fiberglass reinforced polyamide and features a side entry design. Some may find the side entry a little tedious the first few times, but a redesigned single button clasp system on the right side makes it easy to get used to. A single quarter-turn screw on the left side makes for easy two piece disassembly in an emergency. The brace features Leatt's Alternate Load Path Technology (ALPT) which helps disperse energy of a crash throughout the collarbone, shoulders, and back. The front chest plate and rear thoracic strut can be moved forward or backward and removable pads at both locations allow for a tailored fit. In addition, the angle of the thoracic strut can be changed (0-, 5-, 10-, and 15- degrees) via the included rubber caps.