However, the test rides were marred by a series of crashes and renewed concerns over the new tires bikes will be equipped with.


Jorge Lorenzo Fast From The Jump On Day One 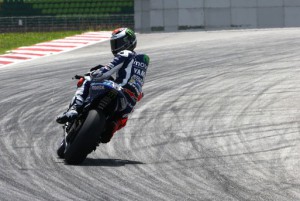 If anyone wondered whether the defending champ would rest on his laurels following his championship, the initial answer was a resounding "no." Testing the new standard engine control units and Michelin tires, Lorenzo set the benchmark lap time on the first day at 2:00.684 during his 37-lap run. The time was over a second better than teammate and last year's MotoGP Championship runner-up, Valentino Rossi.

Lorenzo said he was pleasantly surprised by the performance of the new Michelin tires. All MotoGP bikes will be equipped with them this year, switching from the Bridgestone brand. Lorenzo's Movistar Yamaha team made some significant adjustments to find the right weight distribution in order to get the maximum performance out of the tires. The team even moved at least part of the fuel tank underneath the saddle to distribute weight more evenly.

And it seems as though Lorenzo's team is figuring out the right configuration with the new engine control units.

"The lap times were relatively easy to achieve and every time we exited pit lane we improved something on the bike to understand the electronics better and they adapted very well to the Michelin tires," Lorenzo said, as reported by Cycle News.

Rossi admitted his teammate and rival, Lorenzo, looked very good early. But he said there was time to keep tinkering and improving during the remaining test days.

"The gap to Lorenzo is too big," Rossi said. "It's just the first day and the total count will be at the end of the third, but we have a lot of things to do, so tomorrow we'll try to get a better understanding."


Day Two And Problems With The Michelin Tires 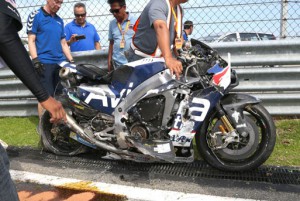 While Lorenzo may have been impressed with the Michelin tires, Frenchman Loris Baz of the Avinita Ducati team wasn't. Baz avoided serious injury on the second test day after flying down the Sepang Circuit's main straightaway at an estimated 175 mph when his rear tire blew and launched him from the bike. Baz was testing the Michelin soft compound tires at the time. Following the crash, Michelin withdrew the tires for the remainder of the test.

However, the crashes weren't ostensibly attributed to the tires. Lorenzo recovered well enough from his fall to record the second fastest time of the day, behind Octo Pramac Ducati's Danilo Petrucci.

Petrucci bested Lorenzo's day 1 time at 2:00.095. Hector Barbera of the Avinita Ducati team surprised many by turning in the day's third-best time, 0.292 seconds behind Petrucci. Following up in fourth was Repsol Honda's Marc Marquez at 0.748 seconds behind the leader. Cal Crutchlow of LCR Honda rounded out the top five at 0.804 seconds off the leading pace. 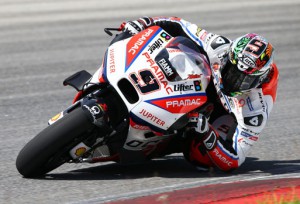 Former MotoGP World Champion Casey Stoner had tongues wagging and eyes peeled on him on the second test day. He hadn't been on a MotoGP bike in over a year. But that didn't stop him from turning in the ninth best time of the day, just over a second off the day's best time.

Even though he rides for the factory Ducati team as a test rider for Andrea Iannone and Andrea Dovizioso, many in racing circles wonder whether the 30-year-old Australian is also slowly making a comeback.

Stoner was a two-time MotoGP World Champion and widely considered one of the most talented riders in the sport's history. Many were shocked when he abruptly retired from racing at the end of the 2012 season.

Since then, he was a test rider for Honda in 2014 and 2015 and moved over to the Ducati team in the same capacity for 2016. Stoner won one of his two MotoGP championships on a Ducati, the only MotoGP championship the venerable motorcycle manufacturer has ever won.