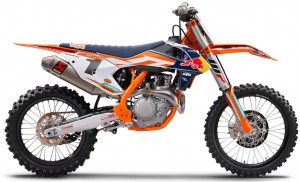 With only four weeks before a burst of fireworks above Angel Stadium in Anaheim, CA, kick off the 2016 Supercross season, KTM introduced the Factory Editions for its 250 SX-F and 450 SX-F models.

The biggest change for these limited production bikes is the WP AER 48 front suspension. Coming in at 48mm, the WP AER (AIR) forks are more than 3 pounds lighter than the WP 4CS setup that was used on last year's Factory Edition models and the 2016 models. 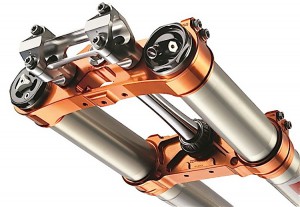 As we all know weight is extremely important when it comes to racing, and with the KTM 450 SX-F already the lightest bike in its class at about 224 pounds, dropping a few more L-Bs can definitely help riders get more of an edge on the competition. The WP air fork setup offers great adjustability and ease of use with an adjustable air spring in the left leg and a damping cartridge in the right. The right fork leg offers a wide range of compression adjustment (top of the fork leg) and rebound adjustment (bottom of the fork leg). Along with the new front suspension, the frontend was treated to new CNC-machined triple clamps that have been treated to KTM orange ano and feature rubber dampers.

Other new bits for both dirt bikes include new handlebars from Neken and ODI Lock-On motorcycle grips. Both bikes are still rolling on DID rims and Dunlop tires, but the visual differences between the two are the graphics, muffler, and seats. The 450 features the Factory KTM and Redbull graphics, an Akropovic muffler, a ribbed seat. 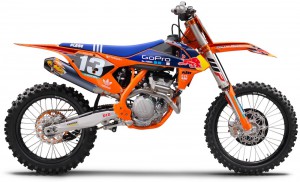 The 250 SX-F Factory Edition is outfitted in a Troy Lee Designs design, as TLD is the official Factory KTM team for the 250 class. Aside from the TLD/Red Bull/KTM livery, the 250 sports an updated FMF slip-on muffler, smooth seat, and team rider, Jessy Nelson's #13 number plates. Joining Jessy on the 250 team will be returning team riders Justin Hill and Shane McElrath, as well as new team members Mitchel Falk and Alexander Frye.

As for the 450 Red Bull/KTM team, it will be comprised of reigning SX/MX Champion, Ryan Dungey, returning teammate Dean Wilson, as well as Marvin Musquin who will be competing in his rookie 450 season.