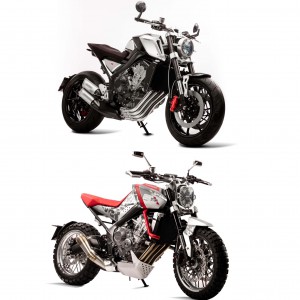 Last week at the Esposizione Mondiale Del Motociclismo (EICMA) show in Milan, Italy, Honda introduced the crowd to two concept bikes that were aesthetically opposing, geared to appeal to two different crowds but based on the same drivetrain platform, the CBR650F.

It seems just about every motorcycle manufacturer is riding the popularity of the Scrambler train. Well, Honda just got its ticket punched to get on board with its CBSix50 concept which is a new school take on the old school Scrambler. Big Red has already been getting a ton of buzz since the company debuted the highly anticipated new Africa Twin model (due out in spring 2016) and if they were to jump on the ball and actually produce the CBSix50 we could easily see people lining up to throw a leg over one. 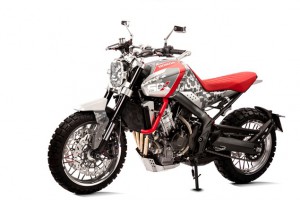 A fresh take on the classic Scrambler style, the CBSix50 looks more toward the future than it draws on Scramblers of the past. Even the flat seating area of the CBSix50 is quite a bit different than the typical scrambler rear section, with its angular sides and tapered end as opposed to the traditional oval shaped cockpit. However, like a traditional scrambler, the seating area does provide lots of room for the rider to move forward or backward for better riding position with the front of the seat climbing up the spine of the high arched gas tank.

A proper scrambler needs a good set of motorcycle tires that provide plenty of traction for off-road mayhem and the Continental Twinduros fit the bill pretty well. Throughout the CBSix50 are a host of machined billet aluminum bits like the stubby hand guards (sans deflectors), headlight mount, and tail light mount. The four-into-1 motorcycle exhaust sports a stainless steel collector and is protected by an aluminum skid plate. Protection for the radiator comes by way of two red spars jutting out from the underside of gas tank. The most eye-catching part of the motorcycle is the finish which features a large-scale digital camo color scheme. While camo is used to obscure or blend in with the background, the large black, grey, and white block pattern combined with red seat screams "look at me!" 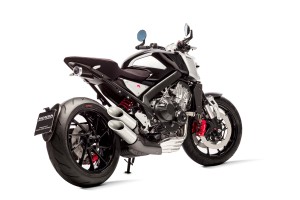 With its angular lines and industrial finish the Honda CB4 concept looks like it could charge Neo through a high-speed chase scene in a Matrix reboot. Like the CBSix50, the CB4 sports Tokiko calipers radially mounted to an inverted frontend. Instead of a single collector at the end of the exhaust, the CB4 features dual mufflers with wide mouth, slash cut tips. A single-sided swingarm helps bring some attention to the blacked out rear wheel. Tucked up under the rear of the seat is a tail light that looks like an underslung exhaust.

Seeing as both these bikes are still concepts we don't know if Honda will actually release them for production. Even if Honda does put these bikes on the assembly line it's hard to say if they will be released as US models. We can only hope so.