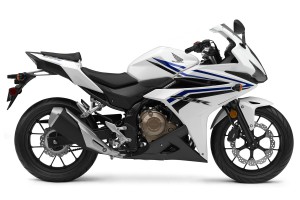 At the Tokyo Motor Show, cutting-edge bikes were revealed by the world's leading motorcycle brands beginning Oct. 29. Among these were Honda, which unveiled a number of new models set to be available in 2016. Among the hot rods soon to be released were Honda's all-new CBR500R.

The 2016 Honda CBR500R is a bike ready to redefine the middleweight class in more ways than one. According to Honda, its 2016 model was designed after specifications based upon critic and rider-acclaimed CBR600RR and CBR1000RR sport-class bikes. 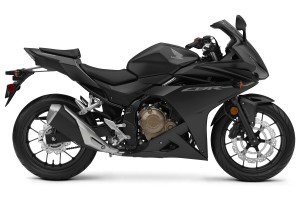 The CBR500R is outfitted with a middleweight engine, but that doesn't mean it should be viewed as weak in the eyes of sport-class riders by any means. Built with Honda's famous parallel-twin, two-cylinder design, the pistons work in tandem with an added wide power band to give the CBR500R a real get-up-and-go, "torquey feel," according to Honda.

The engine packs 471 cubic centimeters of liquid-cooled compression with a ratio of 10.7:1. The bike's bore and stroke are 67 mm by 66.8 mm respectively. Twin cylinders are fed through a programmed fuel injection system complete with 34 mm throttle bodies. The ignition itself is controlled by an onboard computer, digitally transistorized with an electronic advance.

The 2016 model's final valve train comes complete with a dual overhead camshaft, made up of four valves per cylinder. The bike houses a six-speed transmission, with a final drive and an o-ring sealed chain. 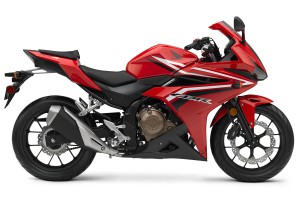 The bike's front brake is made up of a twin-piston caliper complete with a single 320 mm wave disk. The rear brake is a single-caliper 240 mm wave disk. 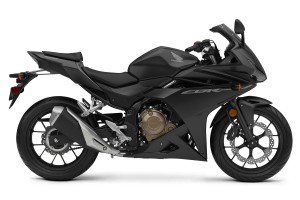 The rider sits atop Honda's CBR500R at a height of 30.9 inches from the pavement. The wheelbase is 55.5 in, and the bike's total rake comes out to 25.5 degrees. The trail is 103 mm. Wet, the Honda CBR500R weighs 425 pounds.This includes all standard equipment, a ready-to-ride tank of fuel and all of the necessary fluids included. Capacity of the fuel tank is 4.1 gallons.

The total miles per gallon rating is still to be determined for Honda's 2016 model, but Honda has noted that the bike does meet the U.S. Environmental Protection Agency's standards. Starting price for the 2016 CBR500R is $6,299, plus destination fees and taxes, according to Honda. The 2016 ABS models will be available in black, or white with blue detailing. The standard model also has a red option available. All 2016 CBR500R's will be available at your local Honda dealer.