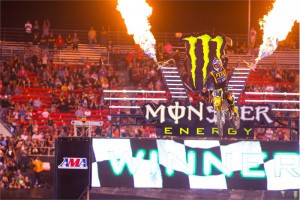 RCH Suzuki Factory Racing's Ken Roczen picked up a cool $100,000 by winning the fifth running of the Monster Energy Cup at Sam Boyd Stadium in Las Vegas, USA at the weekend.

Roczen turned in a 1-4-1 finish in the three 10-lap main event-format race to take the overall victory that promised to pay $1 million if a rider could sweep all three segments.

"I felt great out there," Roczen said. "The bike felt good, but we only had a week and a half to really go through a lot of testing. We tried to squeeze everything in and it worked out. I think that's the best I've ever seen the track in Las Vegas. Normally, it gets rock-hard and dry. I think all the moisture and rain we had previously helped a lot. In the morning it was wet and pretty muddy but for how hot it was during the day, the track was pretty good." 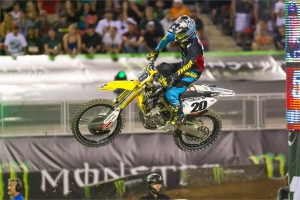 Roczen's RCH stablemate Broc Tickle finished 12th overall but, despite not battling bar-to-bar at the front of the field, the Holly, Michigan rider felt good about his performance to close out the 2015 season.

"All in all, I think it was good," commented Tickle following the event. "I showed some intensity that I struggled with during Supercross. I feel like we made some improvements to the bike and that showed Saturday night. I was stoked with the way I was riding. Unfortunately, results-wise, it didn't show on paper but I'm still stoked with where I'm at. Ivan (Tedesco) has been testing for us the last two months and that's made a big difference. I'm going to take a couple days off and then go overseas and race in Italy. I'll stay on my feet and work on the things that I need to improve before Anaheim. Hopefully, we'll come in there with some speed and a little more confidence and I'll be right there."

Both team principles were on hand in Las Vegas, with Carmichael handling broadcast duties for FOX Sports and Hart keeping a close eye on the action from the pits. 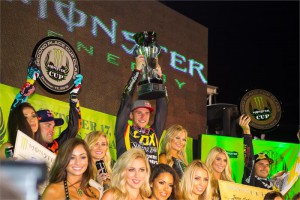 "It was a great night for the team and obviously, for Ken," explained Carmichael. "We still have a long way to go but I'm really happy about the direction we're heading and the people we have in place. Everyone has a great support group around them and we need to keep it that way. We'll keep striving. We're not quite at the level where we want to be. We're all going to get better and continue to progress throughout the off-season. I feel like RCH is headed down the right path as we prepare for the 2016 Monster Energy Cup season. Broc showed a lot of speed, especially during the last practice. The races didn't pan out for him like we wanted them to but his speed is good and his confidence is right where it needs to be. He's going to be good."

"It was a great night," added Hart. "We won the opener of the season and the closer of the season. We have a lot to work on to get ready for next year but we made some big gains in 2015 and we ended the year on a good note. Now it's time to focus on getting Ken and Broc ready for A1 (Anaheim) in January. It's important for us to keep our heads down and move forward."