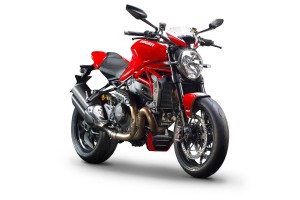 As a grandchild of the original 1992 Ducati M900, the new 2016 Ducati Monster 1200 R is a raw power bike designed for competitive track riding and peak performance.

"The designer wanted to communicate the top performance of the Monster 1200 R with a sport, compact and light design," said Ducati. Their intent with the latest Monster was to create a multi-passenger bike while still retaining "the image of an individualistic model, almost single-seat."

Displaying a classic round front headlight familiar to other bikes in the Monster series, the latest "R" features a "naked" design which was intended for a "less is more" minimalist feel. The entirety of the bike's design took minimalism into consideration - and to a whole new level. From tip to tail, the Monster 1200 R seems to scream power and simplicity.

The 1200 R rides upon a large back tire (a [mageProductLink sku="329-8711053" title=""]Pirelli Diablo Supercorsa SP 200/55 ZR-17[/mageProductLink]), but because of its angle and distance to the bike's tail, the ride won't appear overly large or awkwardly shaped from behind. 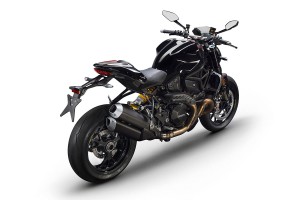 Since the 1200 S, Ducati has outdone itself with some major modifications.

Besides an upgraded engine and compression ratio, the new Monster 1200 R has a much improved braking system. The 1200 R totes the best brakes Brembo has to offer - in the form of two twin radially mounted M50 Monobloc calipers gripping 330mm disks on the front wheel - and 245 millimeter, 2-piston caliper's on the rear.

The 1200 R was designed "for all those who make sports performance their lifestyle and wish to turn each ride into an adrenaline-packed experience without forgoing the essential, practical appeal of a naked model," according to a statement released from Ducati. 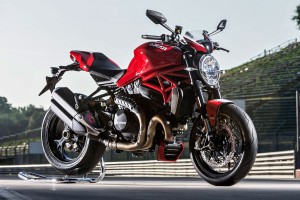 All specifications for the 2016 Ducati Monster 1200 R as provided via Ducati.

Additionally, Ducati provides a seat cover, riding and power nodes, ride-by-wire throttle, and a 24-month unlimited mileage warranty for new bikes. The 1200 R will be commercially available in 2016, and initially available in Ducati Red with a matching color frame and Thrilling Black with a Dark Chrome frame. Graphic logos will be displayed on the fuel tank, passenger seat cover, mini-fairing and front mudguard.