The Chaparral Motorsports UTV Mod Department has customized a plethora of vehicles over the years, but it seems none have gotten as much attention as this latest build, dubbed Snake Bite. The concept for this RZR XP 4 1000 started with the idea of mimicking something many motorsports enthusiasts often encounter when enjoying the outdoors, Agkistrodon contortrix-more commonly known as the Copperhead snake.

The idea was passed onto AVI Wraps, in Beaumont, California and they did an excellent job of creating a custom snakeskin wrap loosely based off the Copperhead pattern and coloring. The design also has an industrial element to it with parts of the snakeskin torn away to expose metal and pieces of the engine ripping through. The overall effect gives it's a new spin on the bio-mechanical designs you see in a lot of tattoo work. For more protection on the trails, Polaris' Lower Door Halves were added to the car which provided a more complete look for the slithering snake skin wrap.

Besides the bodywork, the reptilian theme was carried through on a few select other pieces such as the bezel on the speedo and the rear shock covers. However, instead of using the same vinyl vehicle wrap material, AVI hydro dipped the parts with a snakeskin pattern. The end result is a nice smooth surface that looks like a painted design that would have taken hours to complete.

Not content with the angular shapes of the stock cage, the RZR was given a more streamlined look with the addition of a radius cage.

The radius cage features 1-3/4" D.O.M. steel tubing and secures to the car via the stock cage mounts. Additional support and protection is provided by the full wrap rear of the cage with built-in bumper and taillight guards. To complement the colors in the wrap and hydro dipped parts the cage along with the suspension components were covered in Candy Copper powdercoat. The copper color looks awesome and emits a beautifully warm glow when basking in the sun.

It can get pretty nasty out there ripping the dunes and trails, so to help give the new owner and their passengers a little more blockage from wind, sand, rocks, tree branches, and other flying debris, a glass windshield was mounted to the front of the cage. Installed with removable mounts, the owner can quickly and easily leave the windshield back at camp if they want the open cockpit feel. At the front of the car the stock plastic grill was removed and a Candy Copper AnnLynn laser-cut grille was installed.

Up front the stock powdercoated suspension components were used, however at the rear an Assault Industries' Hi-Clearance Radius Rods Kit was installed. The rods are CNC-machined out of T6 6061 aerospace aluminum and comes with self-lubricating seals and chromoly heim joints. The kit includes upper and lower rods, however, only the lowers are designed with the raised center section. Along with providing additional clearance in the rear when crawling over large objects, the heavy-duty rods are three times stronger than the OE units. With all the work that was going into this machine the stock wheels just weren't going to cut it so the Chaparral team installed a set of EFX Moto Claw tires on 14" Matte Black Method Race Wheels and bolted them up to the RZR.

Inside the cab the stock seats were tossed and in their place a set custom stitched PRP Seats were mounted in position. As you can see PRP did a great job of trimming out the front and rear seats with accent panels that flow with the overall color scheme. Part of PRP's GTSE XW line, the seats not only look good but will provide a better fit for larger riders as they are 2" wider. For additional comfort and safety PRP harnesses were installed with a pair of 3" five-point harnesses for the front and a pair of 2" five-point harnesses for the rear. To help everyone communicate clearly and effectively while barreling across the dunes and dirt, a PCI Race Radio California Ultimate 4 Package was installed. The California package replaces the 4 headsets with four off-road helmet wiring kits to abide by California's UTV helmet law.

The Bluetooth radio package allows for four-way in-car intercom as well as two-way car-to-car communication. The Bluetooth feature is really cool because it allows the driver to pair their smart phone or Bluetooth music device so that they can stream music for all the passengers to hear. They can also make and receive phone calls. You can read more about the PCI Race Radio package in the Product Spotlight article in this same magazine.

Extra lighting was a must for this RZR and to that end the ChapMoto Mod squad installed an intensely bright 40" Cree Double Row Curved LED Light bar to the front of the roll cage. Perfect for late night cruising, the light bar is ultra-bright, and provides a mix of flood lights and spotlights. The rear of the car was treated to a pair of Orange 4' SafeGlo LED whips and SafeGlo quick release mounts.

While this RZR has only been on the showroom for a few short days it has gotten a lot of "ooohs" and "aaahs" from onlookers. The Copperhead design is definitely a hit-especially with the kids. Just don't get too close because this snake has a vicious bite. 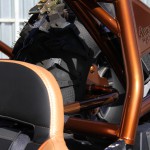 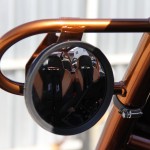 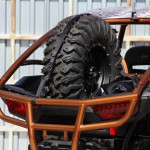 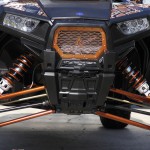 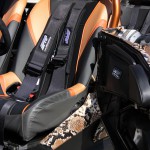 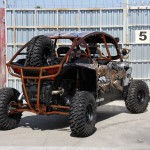 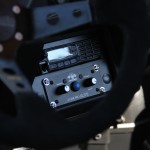 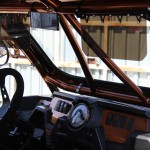 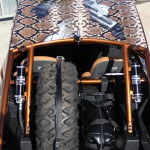 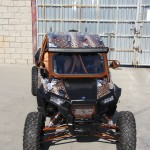 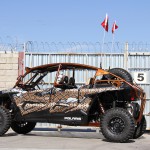 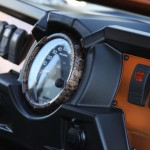 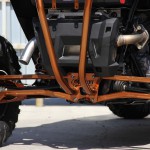 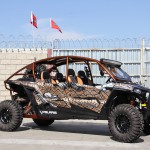