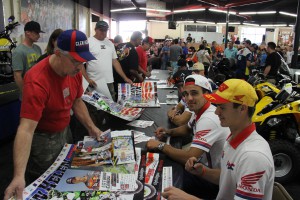 Salut! Hallo! Ciao! Hej! Ola'! Hello!...were just a few of the ways people greeted each other when Chaparral Motorsports hosted its 2015 Glen Helen MXGP Meet and Greet in September of 2015. The building was buzzing with excitement as fans came in from all over the world to meet top international motocross racers. Teams like Red Bull KTM Factory Racing, Rockstar Energy Suzuki Europe, and Yamaha Factory Racing Yamalube were on site. And with Europe's most talented riders: Antonio Cairoli, Harri Kullas, Glenn Coldenhoff, and Romain Febvre attendees were having a hard time figuring out who to meet first. Some of the best US racers were on hand as well including Jason Anderson, Josh Grant, Jessy Nelson, and superstar Ryan Villopoto. Tom White, Erv Braun, Paul Malin, and Glen Helen Raceway owner Bud Feldkamp rounded out the field of industry greats that made for a very successful evening.