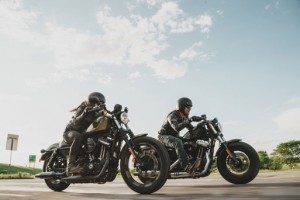 The 2016 Harley-Davidson Sportster Forty-Eight and Iron 883 both will receive suspension upgrades.[/caption]

One of Harley-Davidson's most prized motorcycles for both new and veteran riders is the Sportster. These motorcycles are commonly modified into cafÃ©â€‹ racers, street trackers and scramblers. Even though these bikes have been one of the manufacturer's largest staple rides, Sportsters have been known to have less than desirable suspension. Many people have complained that the Sportster suspension needs upgraded badly. Until now, there hasn't really been any significant Sportster suspension upgrades.

At the same time, the Harley-Davidson Iron 883 will have a new front cartridge fork and two rear emulsion shocks with adjustable preload. The new 883 has skimmed down its rake by 0.5 degrees from the previous 30-degree angle. However, the trail will remain at 4.6 inches. At the back of the bike, the 883 will have nitrogen gas-charged shocks.

"[The Iron 883] was one of the early Dark Custom motorcycles," Harley-Davidson announced on its website. "A dark pioneer of raw, blacked-out, stripped-down custom aggression. So the question was: how do you make something that good better? Here's the answer. You build on it. All new suspension. A new rolled leather seat. Jaw dropping new pipes and wheels. All the details dialed in tight."

These improvements are likely to be noticed by any Sportster fanatic, while driving performance with an overall new edge to the design. The Forty-Eight's price will range between $11,199 and $11,649 (depending on color), while the Iron 883 will be between $8,849 and $9,299.