No, that's not a typo. You read that correctly. In a new viral video from Australian stuntman Robbie Maddison, an avid surfer, takes his dirt bike to the ocean to hit some waves.

Obviously through specific modifications, Maddison is able to stay afloat through skis added to the front and rear of the dirt bike. Additionally, the bike has specialized wheels that work more as paddles that can help propel the dirt bike on the open water. 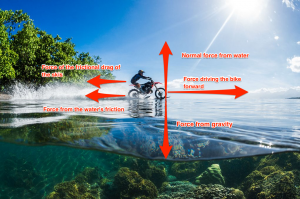 Arthur Schmidt, a physics professor at Northwestern University spoke with Business Insider about how the wheels can keep the bike moving forward on watery surfaces.

"The motor bike has to supply its own motivation through its rear wheel," Schmidt explained to the source. "A dirt bike is designed to run through mud, a fluid much like water only with dirt added. That too is not a far reach to apply to water surfing."

The project is titled Pipe Dream, which was released by DC, a popular skate, surf and motocross brand. Maddison said there were some initial problems keeping the bike afloat when the speed and the weight of the bike eventually counteract, Transworld Motocross magazine reported.

In fact, Maddison said he started to sink about 30 to 40 times during the project because lack of speed or because of the weight of the bike.

"The critical thing is to be able to develop enough force with the wheel treading water to oppose the frictional drag of the ski through water to maintain a speed sufficient to lift the ski and bike against gravity," Schmidt added. 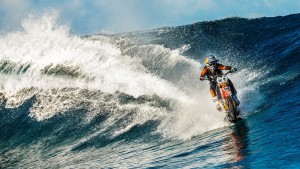 In an interview with Surfer magazine, Maddison explains that if he wasn't a true surfer, the project probably would have been a bust. He added that he couldn't even imagine this being possible unless he was a surfer and understood how to read waves correctly.

Maddison continued by saying he spent his whole life reading waves in Australia and learning how to drop into the wave correctly. This helped him use the skis on the dirt bike to drop in on waves throughout the Pipe Dream video.

The whole process was physically demanding for Maddison and he said there were some scenarios where he wasn't for sure if he'd make it out alive.

"I don't think the photos or video show how physical it was," Maddison told Surfer magazine. "You can't see that when the wave broke right behind me, I honestly thought that might be the end of my life. I've never felt like I was in the wrong place at the wrong time more than I did right there. It was a near-death experience."

Eventually, the project turned out extremely well with no serious injuries. The stuntman simply redefined how far a dirt bike can go in terms of the type of terrain. The crew had to try several different skis before they found the perfect combination for the dirt bike.


A Long Road To The Perfect Waves 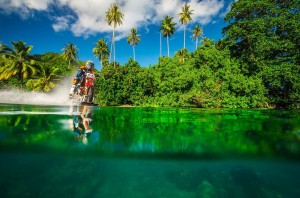 According to ESPN, Maddison spent several weeks testing the project in the U.S., but eventually took the bike to Tahiti to rides the waves at Teahupo'o. It took precise measurements and conditions to get the perfect waves.

Maddison was only able to top out at 35 mph, instead of the 58 mph projected, but they eventually realized the wave was only moving 13 mph. However, once they had their first successful ride, Maddison was able to take on more waves with the dirt bike.