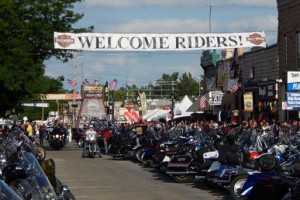 Touted as the nation's largest motorcycle rally, the Sturgis Motorcycle Rally transforms Sturgis, South Dakota, from a quiet town of less than 7,000 into a jam-packed event with almost half-a-million motorcycle enthusiasts. This year marks the 75th anniversary of the Sturgis rally, which is expected to draw even more people. The [mageProductLink sku="pk-15-sturgis" title=""]motorcycle rally[/mageProductLink] will last until Aug. 9. Some experts have predicted the event will reach 1 million attendees this year, which would be the largest gathering ever.

According to Reuters, this week-long motorcycle rally has already caused thousands of people to stuff their bikes to the brim with riding gear, trek across the country, and wait with anticipation for this spectacular event. Bars, event stages, hotels and campsites were already beginning to be filled the weekend before the event started. The town is quickly transformed into a giant mesh of black leather, bandanas and beards.

Hundreds of custom-built bikes, Knuckleheads and Harley-Davidson motorcycles are put on display for event-goers to look at throughout the week. Ken McNenny, co-owner of the Knuckle Saloon in downtown Sturgis, said his business wouldn't exist without the rally, which he prepares for each year, Reuters reported.

In fact, McNenny said he boosts his staff to nearly 200 workers for the event and said he normally has a fourth of the number of workers during the other 51 weeks of the year.


Rally Changing With A New Generation Of Riders 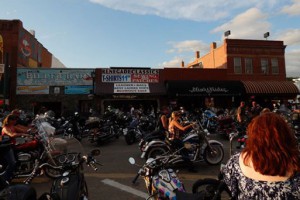 In the past, a lot of people associated the rally with drugs, nudity and biker gangs that ruled the town for a week. Heidi Kruse, executive director of the Sturgis Chamber of Commerce, explained even though this is a misconception of the rally, the types of bikers have significantly changed in the last few years, Reuters reported.

"We're trying to tailor it to the younger generation," Kruse said. "There are misconceptions about who's filling the town. There are now accountants and lawyers. It's certainly not the biker gangs from the 70s."

According to The Associated Press, many people attending the event want to bring a positive light to motorcycle riders, especially after the events that occurred earlier this year in Waco, Texas, where a massive biker gang shootout happened.

Sturgis Police Chief Jim Bush told the source that he expects this year's event to be safe and secure. Bush added that he believes the information the police department has indicates there will not by any rival biker gang activity.

As a precaution, the police department calls in officers from seven or eight other states to help the department handle the massive crowd. The event continues to get plenty of publicity and all the organizers want to keep it that way with a safe and fun rally.


Sturgis Partners Up With Harley-Davidson 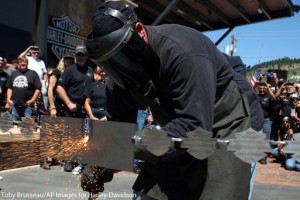 Harley-Davidson recently became the official partner of the Sturgis motorcycle rally. The company built a brand new stage on Main Street that will be able to hold concerts, events and be a general place to hang out during the event.

Earlier in the week the major motorcycle manufacturer unveiled the new Harley-Davidson Rally Point stage with a welder cutting a metal chain instead of the traditional oversized scissors and ribbon.

"We are thrilled to be here," said Bill Davidson, vice president of the Harley-Davidson museum and great-grandson of founder William A. Davidson. "This is a historic moment, to be able to unveil this phenomenal part of Main Street with all of you is a pretty special time, so thanks for being here. "Sturgis is proven to be a mecca for riders from all over the world to gather here and what's really cool is during its initial 75 years Harley-Davidson riders have truly defined what this event is."

Several major music acts are scheduled to play throughout the week as more riders enter the city.