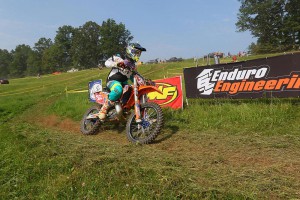 KTM support rider Steward Baylor took the win at the seventh round of the Kenda AMA National Enduro Series by 51 seconds over the next closest competitor.

Baylor, a former National Enduro Champion, started the day off with a mediocre test score but quickly changed the tune for the next five sections. His 9th place finish on test one would be his worst placement of the day as he returned to win the next two tests after that. He collected two more 2nd place test scores and one more win on his way to claiming the overall victory.

FMF KTM Factory riders Russell Bobbitt and Kailub Russell both had difficult race days. Bobbitt did secure a test win in the first section, which was primarily a grass track section, but struggled to take his dirt bike into the top three after that. Russell also had issues staying at the top of the leaderboard and ended his day with a 6th place result.

Baylor's win at the Rattlesnake Enduro helped him gain valuable points in the championship chase on current leader Russell. With three rounds remaining, Baylor is now 24 points behind Russell.