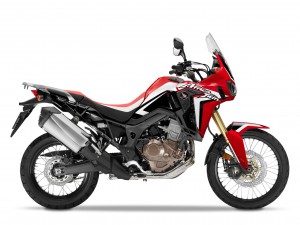 Remember the adventure bike prototype Honda displayed at EICMA, well it's real and it's coming to America. Details were sparse until now! American Honda confirmed that the all-new CRF1000L Africa Twin will be in U.S. dealers early next year. The CRF1000 is a nod to the Africa Twin from the late '80s.

Early this morning on Facebook, Honda Portugal posted and removed the apparent spec sheet for the CRF1000L Africa Twin. A video was uncovered by ADVPulse, and appears to be the sixth episode of Honda's "True Adventure" series.

The ADV bike will weigh 534 lbs. with a full 5-gallon fuel tank, compared to the BMW R1200GS claiming 525 pounds, fully-fuelled. Honda's Dual Clutch Transmission appears to be optional. Shift the 6-speed gearbox with your toe, and the claim drops to 502 lbs., which is pretty light in this class. he Africa Twin appears to be aimed more toward serious "adventure" riders than ones who stick mostly to pavement.