The Italian motorcycle manufacturer, Moto Guzzi, recently announced two new motorcycle models that were released this year and are a part of its 2016 line. The first model released was the 2016 Moto Guzzi Audace, a unique take on an urban muscle cruiser.

Many in the industry expected big things after Moto Guzzi successfully created the largest V-Twin motorcycle manufactured in Europe. Both the Audace and the 2016 Moto Guzzi Eldorado were based off the company's California 1400 models, but are far from that platform. 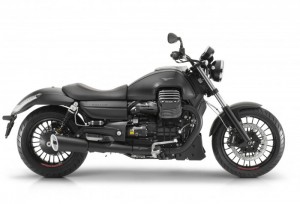 Moto Guzzi said the Audace was built as the "dark soul" within the company, which comes in all black and matte black chrome. The urban muscle cruiser is one of the first true tough guy motorcycles released from the Italian company.

The Audace has a massive 1380 cc engine, six-speed transmission and a claimed torque of 89.2 pound-feet at 3,000 rpm. The bike's estimated horsepower reaches up to 96 at 6,500 rpm. Its 18-inch front wheel and 16-inch rear wheel are both cast-aluminum and blacked out.

Additionally, the Audace has an aggressive stance with a wide drag bar to give cruiser riders a more intense positioning that is often not found on these types of bikes. The saddle and footpeg locations are also built to give riders more of an aggressive stance on the bike as well. The position helps riders get more straight-lined acceleration with its aggressive build.

The Audace comes with slash-cut mufflers and dual exhaust pipes. Even the mirrors are blacked out along with the bike's glossed straight handlebar. While the bike has plenty of stability and control over bumps in the road, the ride certainly takes a lot of muscle on more curvaceous routes. 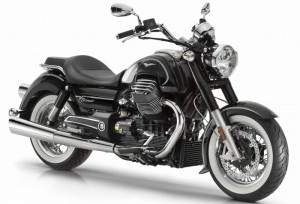 Unlike the Audace, the Eldorado has a much more classic and retro feel to the ride. Its modified secondary air supply system gives the bike a gentler and smoother ride at a lower rpm. To give the bike its classic look, Moto Guzzi uses donut-style white sidewall tires with 16-inch laced wheels. Its heavy-duty bullhorn handlebars, enormous headlight and tapered grips give the ride a vintage appeal.

Even though both bikes pack a lot of power, the Audace seems to give more agility at higher speeds. The power cruiser Audace is priced in the U.S. at $15,490, and is expected to be released in July. The Eldorado is currently available for $15,990.