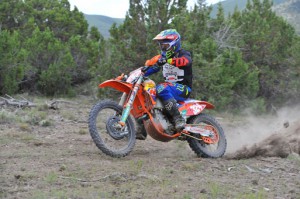 FMF KTM Factory support rider Gary Sutherlin took a win at the sixth round of the AMA National Hare & Hound Series to help move his KTM further up in the championship standings.

Sutherlin did not have the best jump off the line and came out around 15th at the end of the long bomb run. His teammate, Ivan Ramirez, pulled the holeshot and was leading the pack early on the first lap.

A few miles into the race, Ramirez began to suffer complications from a crash suffered a week ago. Ramirez slowed down to deal with the issues and dropped to 4th. Meanwhile, Sutherlin charged forward and was able to move into the lead and pull a nearly two minute gap on the field by the end of the first loop.

The course was quite dusty for the majority of the event and that kept the riders spread pretty far. The last 15 miles of the race, an unexpected rainstorm entered the area and blasted the riders with hail. Sutherlin had a comfortable lead and was able to ride through the storm to secure the win. He was followed by Axel Pearson, Jacob Argubright and Ramirez.