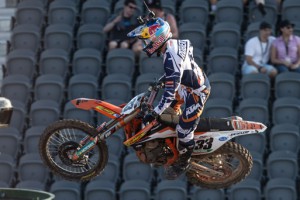 Robert and Webb were placed in the first EnduroX heat. They both put their KTM's out front quickly. Webb was able to move into the lead in the rock section after the third turn while Robert worked his way up through a few riders to move into a top spot. Webb stretched his lead out front to easily take the heat win while Robert finished a solid 2nd.

The two KTM riders top heat finishes earned them a great pick for the main event. They both got out of the gate quickly and were up in the front of the pack. Webb was able to move around the first two riders after they got held up in the rock section. He went on to lead the first lap. Meanwhile, Robert had moved into a top three position and began trying to close in on Webb. 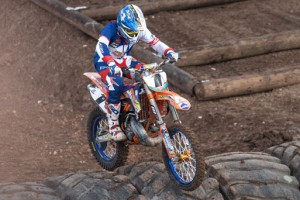 Webb led the opening laps while a hard-charging Mike Brown and Robert began the hunt for the lead position. Brown was able to make a pass on Webb with a few laps remaining. While Brown and Webb battled for that position, it allowed Robert to close the gap. Once Webb was in view, Robert turned up the gas and was able to reel him in. Robert made the pass for 2nd position over the tire double. Robert spent the remaining laps trying to chase down the lead ride of Brown. He put in a great effort and closed the gap to a few bike lengths but was unable to make the pass. He finished 2nd while Webb was 3rd.

"I felt really good tonight," stated Robert. "This track was really fun and I am happy with my finish. I have come back from some injuries this year and I finally feel 100%. I am excited to get a good finish here and continue to improve in the series."