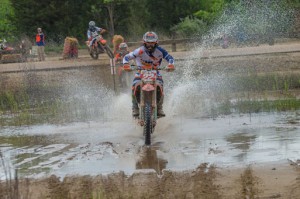 The current championship point's leader started the race off just as he had the previous rounds with a first test win. "I always ride good at the beginning of the race," stated Russell. "The difference is today I was able to ride good through the end and earn my first win."

Russell won four special tests on his way to his first victory. Despite the slick conditions from some rain in the early morning, Russell was able to navigate the course cleanly aboard his new Factory Edition motorcycle to put together an impressive ride. His win at this round increases his point lead to 23 points at the halfway point of the series.

His teammate, Russell Bobbitt, and winner of the previous National Enduro round, had an up and down day. "I just never seemed to adjust to the bike or course conditions today," stated Bobbitt. Bobbitt had his best test section in the fourth section of the day and his overall times earned him 5th overall. He is now tied for 2nd in the point standings.

Also just missing the podium was KTM support rider Steward Baylor. The KTM pilot had a solid run throughout the day to finish 4th overall.